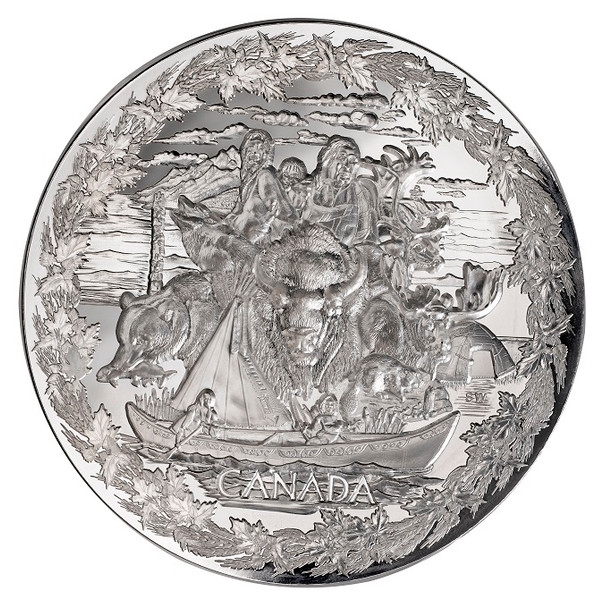 Along with the Fine Gold Kilo Coin, these unprecedented coins feature two designs that portray the story of Early Canada (2007) and Towards Confederation (2008), each masterpiece executed in both of these fine metals.

This coin depicts Canada's diverse Native heritage surrounded by a wreath of maple leaves, the internationally renowned symbol of Canada.

The story behind the design of this masterpiece:

Canada's diverse and abundant wildlife play the central role in the coin's design: a grizzly bear with a salmon in its mouth to represent the west coast a plains bison for the prairies, a moose and a beaver for the central and eastern regions and a wolf and caribou for the north.

The First Peoples are represented in this design, both as individuals and through their distinctive building forms which were influenced by the geography, climate and the available building materials: the totem pole is found on the left side of the coin and represents the West Coast, the tipi is placed centrally in the design to represent the prairies, the wigwam is placed to the right side of the coin to represent Eastern Canada, and the inukshuk of the North is placed near the top of the design.

This coin design also displays Canada's rugged geography. The left side of the coin represents the West Coast with both ocean and mountains, while centrally the design conveys both Prairies and inland waters. To the right side of the coin is the rugged East Coast Ocean, which then transforms into the barren lands of the North.

Now: $119.95
Was:
These coins celebrate one of Canada's national animals, the hard-working beaver.This 20-Dollar coin is certified to be 99.99% pure silver with a diameter of 38 millimetres and a metal weight of 1...

Now: $109.95
Was:
Theme:This stunning fine silver coin is the perfect backdrop for the sparkling hologram of two maple leaves that sits at its centre.Hope for long-term peace and good fortune are important markers of...

Now: $99.95
Was:
Snowflakes and crystals: A beautiful holiday gift! Your coin has a limited mintage, gorgeously MADE WITH SWAROVSKI® ELEMENTS, and a beautiful artistic rendering of a snowstorm. A perfect gift...

Now: $74.95
Was:
Theme:   A Blessing for Long Life Like the strong-backed tortoise with its steady, relaxed gait, the Chinese cherish harmony—and the longevity it brings. Indeed,...

Now: $181.65
Was:
A mystery of gold lost at sea During the 17th and 18th centuries, French coins were a cornerstone of commerce in New France, of which some began to disappear after the surrender...

Now: $29.95
Was:
Features: 4th edition features a special edition painted 25-cent depicting a stunning holiday tree coinIncludes the complete set of Canadian coins to mark the date of those special and...

Now: $349.95
Was:
It is a discovery that sends hearts pounding - and opens a window to the mystifying world of dinosaurs. Their fossilized bones testify to the massive beasts that once ruled the earth but disappeared...