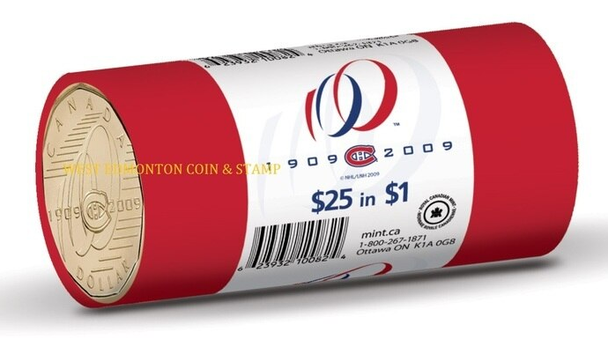 Founded on December 4, 1909, eight years prior to the formation of the NHL, the Montreal Canadiens® are the oldest and most successful franchise in professional hockey history. The numbers speak for themselves… Fifty-four members of Hockey Hall of Fame, countless individual trophy winners, 15 retired jerseys, and of course, an NHL-record 24 Stanley Cup Championships – including an unprecedented five consecutive titles from 1956-1960 and an amazing 10 in 15 seasons from 1964-65 to 1978-79. A memento to stand the test of time In 2009, a commemorative one-dollar coin will enter circulation to celebrate the pride shared by Habs fans from coast to coast. For hockey enthusiasts and avid collectors this 2009 Special Wrap Circulation Coin Roll is the perfect way to preserve this milestone and keep the spirit of hockey alive for generations to come.

Now: $49.95
Was:
As the world turns its attention to Brazil for the Rio 2016 Olympic and Paralympic Games, our famous loonie is at it again, sporting a special design to express pride in Canada’s athletes and...

Now: $59.95
Was:
Your favourite team's primary logo is debossed on this genuine leather wallet and the team's colours line the inside.

Now: $12.95
Was:
Show support for your favourite team with a die cut keychain!

Now: $34.95
Was:
Coin Roll in Original Wrap, Perfect for Collectors!

Now: $199.95
Was:
2012 Complete Sealed Roll of 25 Regular $1 Loonie Coins The 2012 loonies without the hologram security feature are very scarce. Very few of these loonies were issued into circulation before the...

Now: $74.95
Was:
They played with passion and a rugged determination, carried by an enduring love for the game; in an era when there was little protective equipment, the hard-playing goaltenders of the Original...

Now: $349.95
Was:
1973 25-CENT LARGE BUST SCARCE UNCIRCULATED SET - 100TH ANNIVERSARY OF THE RCMP   Your uncirculated coins have been carefully selected and are the best available at the time of shipment This...