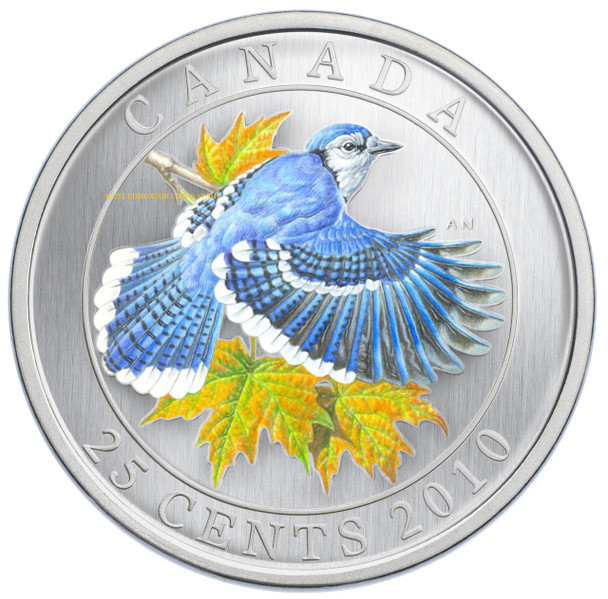 Noisy blue glider
Flight seems almost effortless for the Blue Jay (Cyanocitta cristata) as it glides through the air with surprising speed while barely flapping its wings. However, the jay’s quiet arrival is often announced by its harsh calls, which sometimes mimic other birds such as the Red-shouldered Hawk. The jay’s calls often alerts other birds to the presence of humans, cats or other possible predators.
Another surprise—its vivid blue colour is an illusion created by the unique inner structure of the jay’s feathers and they way they reflect light. Crush a Blue Jay feather and the blue tones disappear. This shimmering blue adorns the Jay’s crest, back, wings and tail, which are also accented in black and white. Unlike many bird species, there are no obvious differences in the plumage of males and females.
The Blue Jay is a very noisy bird that makes its home all over the province of Quebec.
See it anytime with this coloured coin!

Now: $49.95
Was:
ThemeCanadians in nearly any region of the country can see this denizen of populated areas pulling worms from lawns and perched on high, singing its variety of lovely songs, throughout the country’s...

Now: $79.95
Was:
Golden hues on the wing   A cheerful chirping song from a tree in an open space may help you to spot an American Goldfinch (Carduelis tristis). The bright, canary-yellow of the...

Now: $49.95
Was:
The unique coast-dwelling Harlequin duck is a rare and lovely sight along Canada’s Pacific and Atlantic shores in winter, and among fast-moving inland streams in summer. This fourth coin in the Royal...

Now: $79.95
Was:
Golden hues on the wing   A cheerful chirping song from a tree in an open space may help you to spot an American Goldfinch (Carduelis tristis). The bright, canary-yellow of the...

Now: $39.95
Was:
Serenade of a Springtime SongsterIn the first summery days of late May, Pheucticus ludovicianus announces its arrival. The medium-build bird, about 20 centimetres (8 in) long, black-headed, bright...

Now: $119.95
Was:
DESCRIPTION Love is a precious gift that takes many shapes in our lives, whether it’s the grounding love between family members and friends; the unbreakable bond of parent and child;...

Now: $184.95
Was:
DESCRIPTION    This brilliant Star Wars: The Bad Batch™ coin features the demolitions expert of the group, Wrecker!   It is made with 1oz of pure silver and presents a...