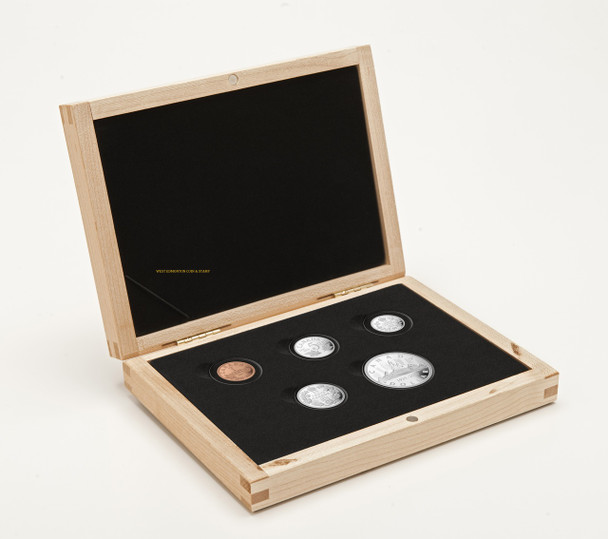 Spirit of a nation.

A nation’s character and spirit are often revealed in the designs of its circulation coins. For Canada, no other coin has done this more profoundly than the voyageur silver dollar.
Canada’s first circulating silver dollar was introduced in 1935 to mark the Silver Jubilee celebrations for King George V. Its design featured a voyageur and Native person paddling a canoe in tribute to the fur trade; the industry that founded the nation—and the image of a vast untamed frontier it conveyed made it one of the most popular coin designs ever to enter circulation in Canada.
The voyageur silver dollar was designed by renowned Toronto sculptor, Emanuel Hahn, making it one of Canada’s first domestically-designed coins and great source of pride. Even though the Royal Canadian Mint had begun striking Canada’s coins in 1908, the designs, tools and dies were still being produced by the Royal Mint in England. This was the case for the coins that were already in circulation when the voyageur silver dollar was introduced. While they were engraved by European sculptors, the presence of maple leaves in their designs hinted at an ever-expanding national identity for a young Canada. In 1935, the voyageur silver dollar brought the essence of the nation’s character to the forefront. It evoked the spirit of adventure that first lured explorers and voyageurs across the continent—an epic idea that continues to inspire centuries later.

Now: $229.95
Was:
A battlefield gives birth to a flower; a flower inspires a poem; a poem prompts a movement; and a single day of tribute blossoms into a month of remembrance. Every poppy worn on coats and hats...

Now: $159.95
Was:
PRODUCT SPECIFICATIONS SPECIAL FEATURES Includes a selectively coloured version of the 2019 Proof Dollar, struck in 99.99% pure silver that is only available as part of this set. On the...

Now: $99.95
Was:
It is a discovery that sends hearts pounding and opens a window to the mystifying world of dinosaurs. Their fossilized bones testify to the massive beasts that once ruled the earth but disappeared...

Now: $89.95
Was:
This year’s two-dollar coin features an elk calf. In early summer, elk cows give birth to a single spotted calf that weighs about 16 kg (35 lbs). On a diet of their mother’s rich milk,...

Now: $299.95
Was:
2012 RCNA (Royal Canadian Numismatic Association) Proof Set. Limited to 200 sets worldwide NOT OFFERED THROUGH THE ROYAL CANADIAN MINTThis is a special addition 2012 Canadian proof set that was only...

Now: $89.95
Was:
YOUNG LYNX The Royal Canadian Mint is proud to present a Special Edition 2010 Specimen Set of Canadian coins. The finish on these superb coins is a three-fold combination of brilliant and frosted...

Now: $2,985.18
Was:
Designing a nation's character   The Coat of Arms for British Columbia (BC) incorporates the Provincial Shield as a central element. The upper section of the shield features the Union Jack...