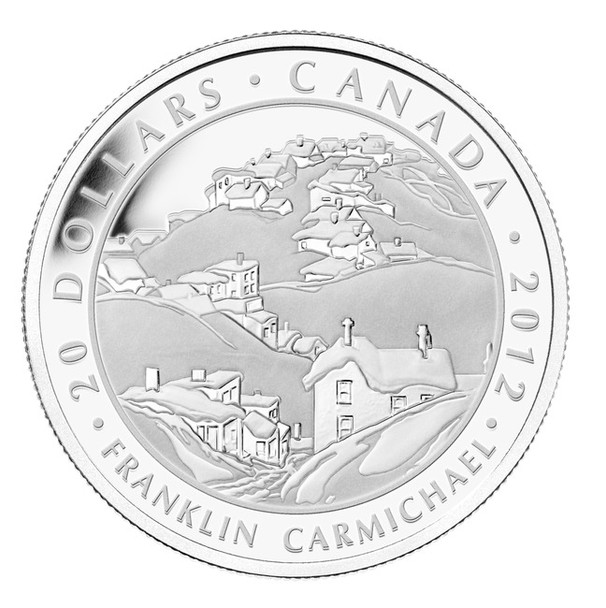 Born on May 4, 1890, in Orillia, Ontario, Franklin Carmichael showed artistic potential at a young age. As a boy, he decorated carriages in his father’s carriage shop. The graphic scrollwork allowed him to hone design skills he would use his entire life. In Houses, Cobalt (c. 1931-1932), he used colour linocut to depict the town of Cobalt. This town had been a boom town after the discovery of silver, but was largely in decline by the 1920s when a number of artists were attracted by its rugged landscape and abandoned mines.

In your coin, Royal Canadian Mint engravers reproduced Carmichael’s memorable image of houses that rise up the rolling hillside covered in thick snow.

Design:
In your coin’s reproduction of Carmichael’s painting Houses, Cobalt (c. 1931-1932), you see an example of Carmichael’s style for this era. Linocut printmaking—cutting a relief design into a linoleum surface that is then inked and pressed onto the paper—was popular in the early years of the 20th century, first for wallpaper printing, then for prints.

Packaging:
• Your coin is encapsulated and presented in a Royal Canadian Mint branded maroon clamshell case lined with flock and protected by a black sleeve.