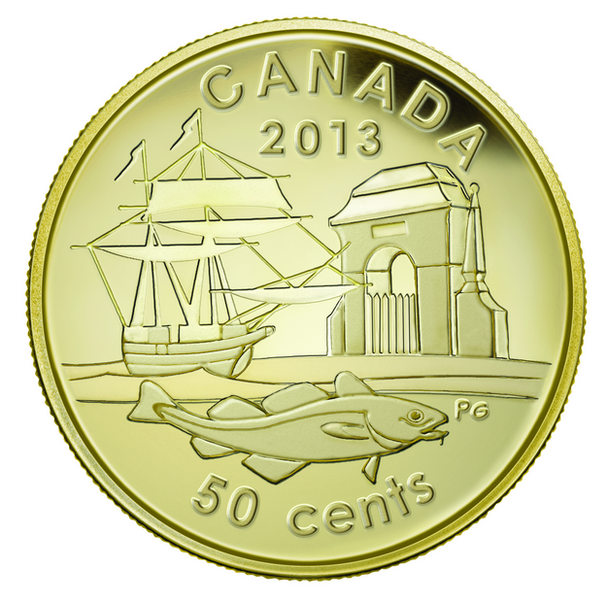 Theme:
Laying the foundation for a nation: The 300th Anniversary of Louisbourg

Description:
This 1/25-ounce coin is certified to be 99.99% pure gold with a diameter of 13.92 millimetres and a metal weight of 1.27 grams.
The reverse image by Canadian artist Peter Gough features a cod fish and ship as well as the Frédéric Gate.
The reverse is engraved with the word “CANADA,” the date “2013,” and the face value of “50 CENTS.” The obverse features the effigy of Her Majesty Queen Elizabeth II by Susannah Blunt.

Complete Certificate Text:
Laying the Foundation for a Nation: The 300th Anniversary of Louisbourg
During the first half of the 18th century, the fortified port of Louisbourg (in modern-day Cape Breton Island) was the centre of French power in the Atlantic region, and home to one of the largest military garrisons in New France. But while Louisbourg’s military exploits have been widely celebrated, the town was also one of the New World’s most important economic and cultural crossroads, and a major hub for fishing and trading ships from across the globe.

Louisbourg was initially founded by a small group of about 150 French colonists in the year 1713, after the signing of the Treaty of Utrecht. When Louisbourg was named the capital of the French colony of Île Royale, it wasn’t long before the modest settlement became a thriving community.

With its huge natural harbour, Louisbourg offered a vital link between the Atlantic Ocean’s lucrative Grand Banks fishery and the rich waterways of the St. Lawrence, the ports of western France and the Caribbean. By the early 1750s, just 40 years after it was founded, despite its siege and capture in 1745, the town’s population had grown to more than 4,000 people. At its peak, Louisbourg was one of the busiest ports on the continent.

The British captured Louisbourg in 1758, but abandoned it in 1768 in favour of Halifax. Nothing was left but a fishing village called Louisbourg ringing the harbour. In 1926, the French settlement and fortifications of Louisbourg and the sites associated with the sieges were declared a National Historic Site. In the 1960s, the original fortified town was partially rebuilt and given new life as a tourist attraction, where visitors can experience first-hand what life was like in New France in the 1740s.

The year 2013 marks the 300th anniversary of the founding of Louisbourg. Today, the Fortress of Louisbourg serves as both a model of world-class historic reconstruction and an enduring reminder of the essential role the settlement played in the development of Nova Scotia, and in helping to lay the foundation for the country that would one day be called Canada.

Now: $2,811.39
Was:
Theme:This stunning scallop-edged pure gold coin celebrates the strong and vibrant Chinese communities of Canada, the unique heritage of Chinese Canadians, and the unique customs of this ancient...

Now: $89.95
Was:
Theme:Laying the foundation for a nation: The 300th Anniversary of Louisbourg Description:This $20 coin is certified to be 99.99% pure silver with a diameter of 40 millimetres and a metal weight of...

Now: $11.95
Was:
These sleek albums feature 100% safe pockets free of chemical softeners, a beautiful motif on the cover and a wide range of different colors...

Now: $32.00
Was: $39.95
Watch two enterprising children build a snowman, then enjoy the final result with this beautifully colourful lenticular coin designed to celebrate one of the joys of the Canadian winter holidays...