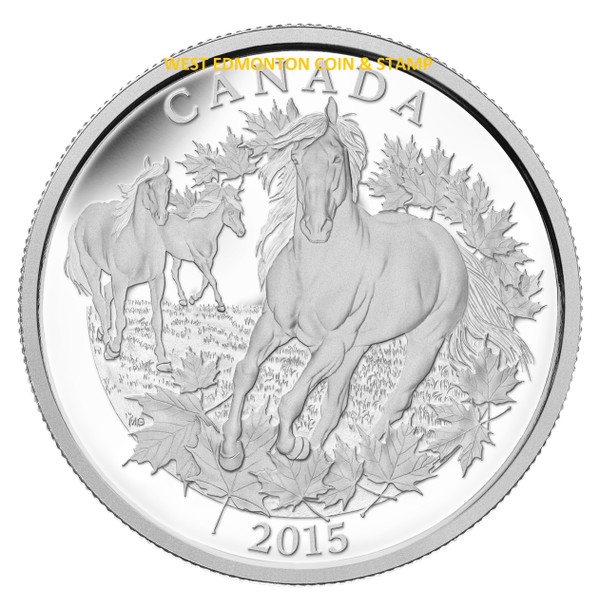 The year 2015 marks the 350th anniversary of the introduction of the Canadian Horse. Robust, resilient, and good natured, the petit cheval de fer—the “little iron horse,” as it became known in its native Quebec—has survived near extinction to emerge as one of Canada’s official national symbols. The Royal Canadian Mint proudly celebrates the anniversary of its introduction with a unique half-kilogram coin of 99.99% pure silver.

DESIGN:
The reverse design by Canadian artist Michelle Grant features a portrait of three Canadian Horses bounding through a cascade of maple leaves. In the centre of the image, a stallion leaps toward the viewer across a grassy field. A cascade of maple leaves spin clockwise, like the hands of time, around him. Two other Canadian Horses race toward him in the left background. The leaves are engraved in multiple textures to underscore the diverse history of the Little Iron Horse that is so intertwined with the development of Canada.

Now: $139.95
Was:
As our national banner, Canada’s maple leaf-adorned flag speaks of our sense of belonging to a larger community, one that is a vibrant mosaic of different cultures, languages and beliefs. It...

Now: $46.05
Was:
Lunar Dragon Silver Rectangular Ingot - 10 Gram The Chinese Zodiac is an ancient scheme that relates each year to an animal and its reputed attributes, according to a 12-year mathematical cycle...

$169.95
Now: $125.00
Was: $169.95
This exquisite coin is the fifth in the Royal Canadian Mint’s sought-after series Canadian flora paired with fauna both an engraved and coloured design along with a unique one-of-a-kind,...

Now: $1,688.88
Was:
The beneficent San Xing, or Three Stars, dwell auspiciously in Chinese homes and businesses around the world—and now they’re yours to cherish in this exclusive set. PRODUCT...

Now: $89.95
Was:
2014 $10 FINE SILVER COIN PINTAIL The spring thaw is underway yet a dusting of snow can be seen around the grassy vegetation in the background. In the foreground, the drake stands on ice near the...

Now: $1,099.95
Was:
This low mintage coin is the third in a series of three important historical pieces commemorating Canadian Confederation. Each medal features a historical landmark along the path of Canadian history:...