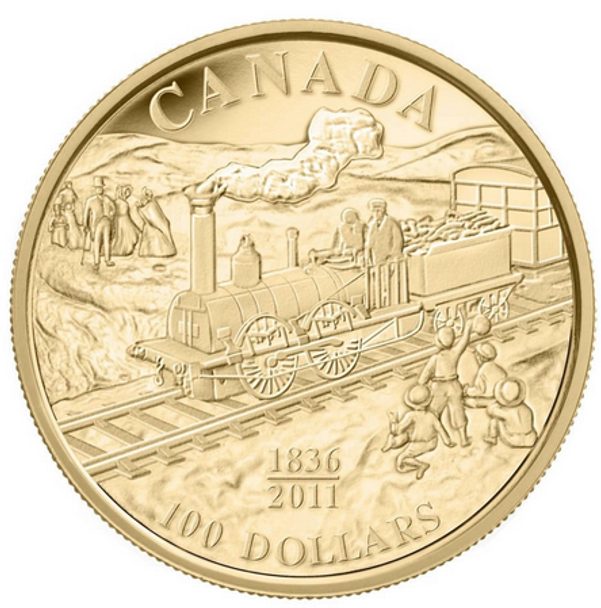 The story of Canada's railway, a gargantuan feat of engineering, was the culmination of a 49-year long romance with the iron road that began with Canada's first public railway in 1836.

The Champlain and St. Lawrence Rail Road was the brainchild of a group of Montreal businessmen that had noticed the prosperity the railway sparked overseas and saw its potential for Canada. In a land where roads were underdeveloped and waterways were frozen for months at a time, a railway between the St. Lawrence and Lake Champlain would significantly reduce the travel time between Montreal and New York.

Construction began in January 1835 and, by the end of the year, most of the railway's infrastructure was in place. A steam locomotive, flatcars, baggage cars, and four passenger cars were also on order. When the locomotive Dorchester was delivered, trial runs were done at night to avoid frightening the public.

The Champlain and St. Lawrence Rail Road opened in July 1836 to a grand celebration. Lord Gosford, Governor General of Lower Canada, and Louis-Joseph Papineau were among the 300 guests to participate in Dorchester's inaugural run.

Canada's love affair with the railway had begun. The iron road began to take off in all directions, spawning towns and cities, and ultimately uniting the nation from coast to coast.

Reduced mintage of only 3,000 coins worldwide makes this a must-have work of art.

Superior sculpting captures the excitement of the early railway in exquisite detail.

Packaging:
Each coin is encapsulated and presented in a maroon clamshell case lined with flock and protected by a black sleeve.

Now: $89.95
Was:
In the summer of 1914, the Royal Canadian Navy was still in its infancy when the looming threat of war sparked fears of an enemy naval threat to Canada’s lengthy coastline. The addition of two new...

Now: $1,199.95
Was:
DESCRIPTION Unique-size gold coin, order yours today! This exciting new coin series by the Royal Canadian Mint pairs some of Canada's most stunning World Heritage properties with other properties...