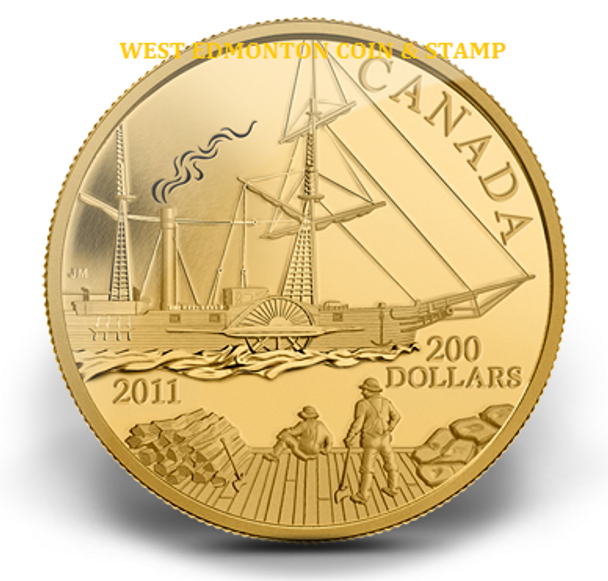 For hundreds of years, sailing ships ruled the seas. They were the driving instrument of global exploration, settlement and trade. By the early eighteenth century, however, a new technology emerged that would roughly a century later, supplant the sail. It was the steam engine.

With this new source of internal power, ships were no longer at the mercy of the shifting wind. As steam power improved, ships reduced the length of voyages by days, weeks, and even months.

The S.S. Beaver was a sail-and-steam hybrid and the object of much curiosity when she was launched in Blackwall near London in May, 1835. This stout, 31 m (101 ft) vessel was commissioned by the Hudson's Bay Company (HBC) as a supply ship.

The Beaver sailed across the Atlantic Ocean, around Cape Horn and up the coast to Fort Vancouver, one of HBC's fur-trading posts located on the Columbia River near present-day Portland (Oregon). After 225 days under sail, her 4 m (13 ft) steam-powered paddle wheels were installed to herald the start of a new era of steam for North America's Pacific Coast.

In 1862, the Beaver was charted by the Royal Navy as Her Majesty's Hired Survey Ship and spent seven years charting the coast. It continued to serve the HBC until 1874 when it was sold to serve as a freighter and towboat. In 1888, the Beaver ran aground on some rocks in the First Narrows of Vancouver Harbor.

Today, only a few relics of the Beaver remain small fragments of the first steamship to operate on Canada's northwest coast.

Packaging:
Each coin is encapsulated and presented in a maroon clamshell case lined with flock and protected by a black sleeve with a serialized certificate.

Now: $3,485.70
Was:
11th issue in this bi-annual series. Continue collecting this beautiful series! The Coat of Arms for Ontario incorporates the Provincial Shield that was originally granted by Queen Victoria in 1868...

Now: $727.19
Was:
Quantity Produced: 5,439 Year: 2006 Denomination: 100.00 Join the excitement on the ice as Canada's royal military college of Canada and the United States military academy lace up their skates for...

Now: $1,580.96
Was:
The bride and groom first met in 2001 while studying at the University of St. Andrews in Scotland. Observers had long speculated the two would marry and in October 2010, Prince William proposed to...

Now: $3,485.70
Was:
The Coat of Arms for Prince Edward Island (PEI) incorporates the Provincial Shield as a central element. The upper section features the English lion. Below, is an oak tree (England) with three...

Now: $1,580.96
Was:
The bride and groom first met in 2001 while studying at the University of St. Andrews in Scotland. Observers had long speculated the two would marry and in October 2010, Prince William proposed to...

Now: $18.95
Was:
Coin Roll in Original Wrap, Perfect for Collectors!