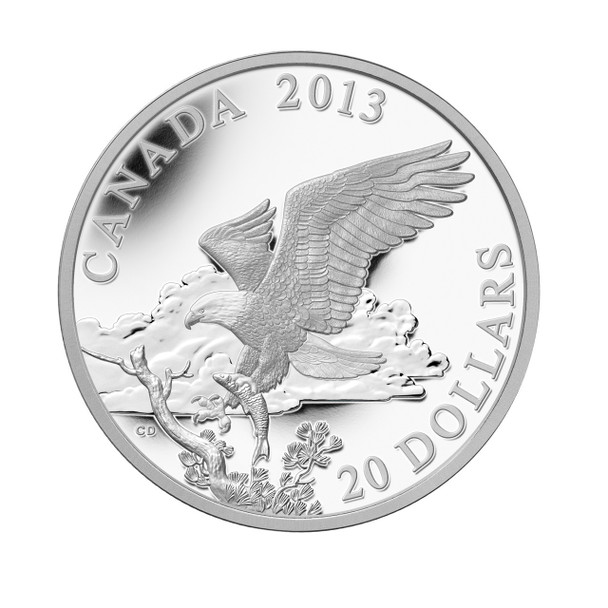 Description:
The reverse image features a majestic bald eagle, with wings extended to the full span, about to land on the branch of a pine tree. In its powerful left claw, the eagle clutches a freshly caught fish. Its right claw is fully extended to grasp the branch. The eagle is viewed in profile from its left side, the details of its impressive wings, distinctive snowy head and tail rendered in fine detail by Royal Canadian Mint engravers and accented with multiple finishes. The frosted head and tail contrast the darker feathers on the body and wings, and define the iconic eagle silhouette against the mirror polished background. The tree and fish have also been given a softer finish that brings the tree forward and adds depth to the overall design.

This coin also features unique edge lettering, with the words “FINE SILVER 1 OZ ARGENT PUR 1 OZ” engraved around the edge of the coin.

The Day’s Catch
The amazing bald eagle—Haliaeetus leucocephalus—is Canada’s largest bird of prey and the only eagle exclusive to North America. An apex predator with no natural enemies, the bald eagle has long been a potent symbol of vision, power and stoicism. The adult boasts a wing span of more than 2 metres, a standing height of about 1 metre, and an average weight of up to 7 kilograms. Females are generally larger than males. The renowned raptor is noted for its distinctive dark-feathered body and white-feathered head and tail, large golden eyes, bright yellow beak and massive yellow claws armed with sharp, powerful talons. This long-lived bird can survive nearly 30 years in the wild and even longer in captivity. Nesting in tall trees normally near large bodies of water, bald eagles survive on a diet of fish, birds, invertebrates and small mammals, but are opportunistic feeders who will also steal from other predators and eat carrion.

When it comes to hunting, the bald eagle’s most important assets are its eyes, its talons, and its exceptional diving speed. Eagle vision is about six times stronger than that of humans. In addition, transparent nictitating membranes on their eyes allow eagles to “blink” without losing sight of prey for even a moment. The eagle’s claws are its key tool for hunting, nest building and more. Composed of three front toes and one back toe, all tipped with long keratinous talons, its claws are connected to tendons in the eagle’s legs and feet that allow it to clamp down on captured prey with crushing force. Once the hunter has spotted the day’s catch, it will dive at speeds in excess of 120 kilometres per hour, snatching its prey from the water or ground with lightning speed. The eagle later uses a claw to hold its catch while tearing at it with its sharp curved beak to eat.

The pillars of the bald eagle diet are fish, birds and small mammals; however, it will also scavenge, consuming carrion such as dead fish (whose white underside is particularly easy to spot from the eagle’s airborne vantage point) when available. Salmon are particularly important to winter survival of eagles which winter on the Pacific Coast. Bald eagles focus on wounded prey, but can easily take down healthy prey animals. They are also opportunists with no compunction about stealing the hard-won food of others, particularly other aquatic birds such as osprey or even aquatic mammals like otters. The eagles will relentlessly chase their smaller bird competitors until the victim’s prize is dropped, or will even snatch a fish or mouse from the talons of a smaller bird mid-flight.

Now: $484.95
Was:
THIS LISTING INCLUDES ALL 4 2013 $20 FINE SILVER BALD EAGLE COINS. EACH COIN COMES IN THEIR ORIGINAL PACKAGE INCLUDING BOX, OUTTER BOX, AND CERTIFICATE PORTRAIT OF POWER LIFELONG MATES RETURNING...

Now: $79.95
Was: $99.95
Found throughout much of Canada, the majestic red-tailed hawk (Buteo jamaicensis) is a graceful glider and a swift hunter that soars effortlessly above the open country. Its superb vision allows it...

Now: $98.00
Was: $199.95
In a world of ancient symbols, Canada’s Coat of Arms is surprisingly young, having been proclaimed by King George V in 1921 and making its first appearance on Canadian coins in...

$99.95
Now: $87.96
Was: $99.95
In a continuing celebration of family bonds in the wild, this ninth coin in the Baby Animals series showcases a classic Canadian icon—the common loon (Gavia immer)—with its offspring in...

Now: $129.95
Was:
Iljuwas (Bill Reid) brought Haida art and culture to a global audience. His extraordinary body of work includes 1,500 pieces ranging from jewellery art to monumental carvings. His artwork has...

Now: $1,049.95
Was:
KEY FEATURES The hunt for historical treasures: We dug deep into Library and Archives Canada’s collection to find the original design by Sir Charles George Young, the Garter King of Arms at...