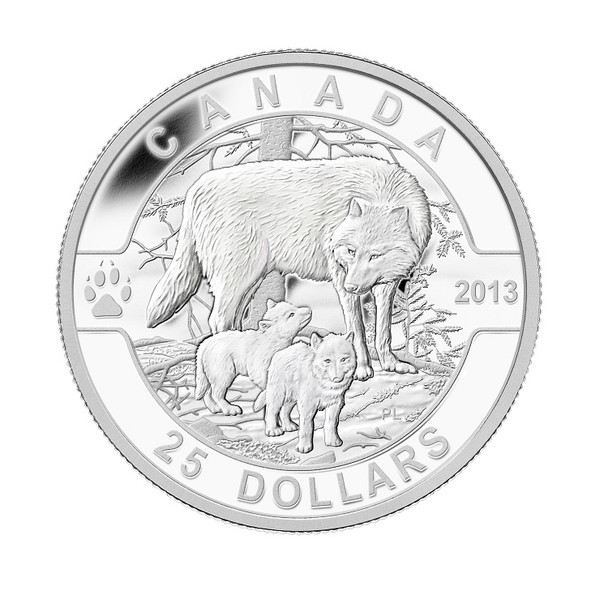 Description:
The reverse design by Canadian artists Pierre Leduc presents a wolf mother with two of her pups in a Canadian forest. The tiny pups stand in front of their mother in the centre of the image, the one in the foreground looking directly at the viewer while its sibling, standing slightly behind it, gazes up at its mother for comfort. The mother stands behind the two pups, her body arched in a protective stance, tail down, head low and gazing up toward the viewer through haunting eyes. The family stands atop a rocky outcropping in a forest. Grassy mosses dot the ground here and there. In the background we see the trunk and sparse branches of a balsam fir, leading down a slope toward more evergreens. The reverse image is framed with a border engraved with the word “CANADA,” the date “2013,” the face value of “25 DOLLARS,” and a stylized wolf paw-print. The obverse features the effigy of Her Majesty Queen Elizabeth II by Susanna Blunt.

Ancient Spirit of Survival: The Wolf

The howl of a wolf pack sends shivers down even the most stalwart spine. Perhaps it is the wolf’s howl that spawned for Canis lupus an association with malevolence despite the utter absence of historical evidence that it is harmful to people. In the entire written history of Canada, there is not a single record of a wolf having killed a human being. Nevertheless, this ancient brother of the domesticated dogs we welcome into our homes has long suffered for the unfounded terror it instills in people.

The largest member of the Canidae family is a notably adaptable animal whose appearance, preferred prey, and habits are largely dependent on subspecies and habitat. Wolf colouring varies from bright white in the Arctic region to various mixes of grey, black, red, and brown in other regions. Wolf lifespans average between 6 and 8 years in the wild, although they can live up to 13 years. In captivity, wolves’ lifespan ranges up to 16 years. Wolves are large animals, up 160 centimetres in length (excluding their 30 to 50-centimetre tail), and weigh up to 80 kilograms (175 pounds).
Wolves prey on large ungulates, such as elk, deer, and even moose, and help to keep prey populations in check. When they have taken down one of these animals, wolves gorge, each wolf consuming up to 9 kilograms (20 pounds) of food in one sitting. They supplement their diet with small animals, fish, fruit, and reptiles. Their own populations wax and wane in response to population changes among prey animals.

Wolves hunt in packs and have done so for thousands of years—a behaviour that has helped to mold a highly developed, complex society within the species. Packs centre around an alpha male and female couple (often the only members who reproduce) and vary in size between 4 and 12 members, with some exceptional packs numbering greater than 30. The packs are territorial, “owning” regions that can be as large as hundreds of square kilometres. They traverse vast distances in their territory each day, seeking prey. Some experts believe that howling—that eerie hallmark of this unique species—is a key element of territory establishment, acting both as a warning to other packs and a call to gathering among pack members.

A Canadian Icon
Across the ancient aeons of this once-wild continent, the wolf roamed free. Its lifestyle became intrinsically woven with the broader fabric of the wilderness, its population ebbing and flowing with that of its prey—even as the wolf itself helped to regulate prey populations in turn. It is an animal of cycles, riding the tide of the wilderness, thriving and languishing by turns throughout the countless millennia of its life in this land, singing its song to the coming and going of the moon. In its rich history, as in its haunting, primordial wail, the wolf pack’s eerie chorus reminds us that, though most of us are relatively recent emigrants, Canada is an ancient land—a land far beyond the mundane, where resilient canines have survived the massive span of millennia and kilometres in harsh, remote conditions. The wolf’s power and mystery, intermingled with the warm familiarity of its reliance on community, embody the sharp contrasts of this land.

Now: $34.96
Was: $44.95
There’s an endless variety of adventures to be found across Canada. Every season and every geographical region has something new and exciting to offer—like climbing icy cliffs, frozen...