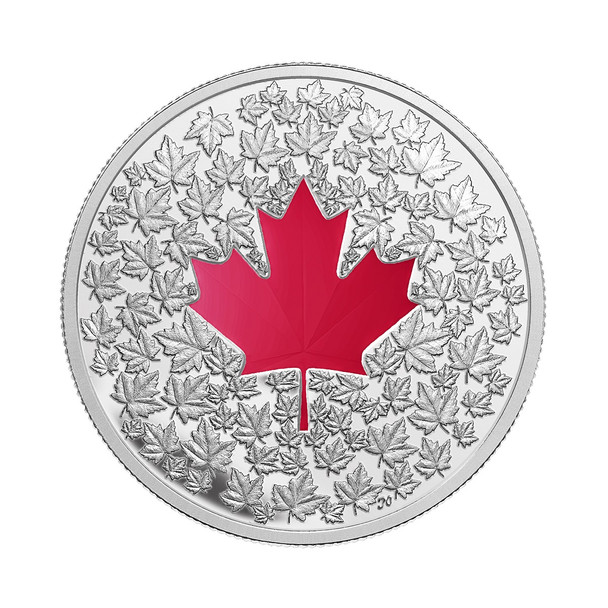 2013 Maple Leaf Impression with enamel
Valour, perseverance, diversity: the maple leaf is a powerful symbol of Canadian identity and values. Internationally recognized, the maple leaf has been a Canadian emblem for almost three hundred years.

This coin showcases the iconic symbol of Canada; the maple leaf. Larger than the previously released Maple Leaf Impression, this beautiful 1 ounce coin also features a sunken central leaf that has been filled with bright red enamel.
The reverse image was created by Royal Canadian Mint engraver José Osio, and features the impression of a red maple leaf amongst much smaller maple leafs.

The coin is encapsulated and presented in a Royal Canadian Mint branded maroon clamshell case lined with flock and protected by a black sleeve.

Emblem of a Nation’s Spirit

From backpackers in Berlin to peacekeepers in Pakistan, Canadians are immediately identifiable by a singular image they faithfully sport on pins, badges, and appliqués: the red maple leaf.

This lyrical cipher has symbolized Canada and Canadians for nearly three hundred years. Historians generally recognize the adoption of the maple leaf by Quebec’s Société Saint-Jean-Baptiste in Montréal in 1836 as the first official use of the symbol to represent an element of Canadian culture.

The symbol was soon popularized in print, song, and in the small markers—such as lapel pins—with which Canadian residents of various origins honoured their homelands. The English had their roses, the Scots their thistle, the Irish their shamrocks, and the French their fleur-de-lis—and native-born Canadians quickly chose the prosaic maple leaf.

The idea of including the maple leaf on Canada’s national flag took root with Lester B. Pearson in World War I, when he noted that every Canadian battalion had included some form of the maple leaf in its insignia. Fifty years later, in 1965, under his leadership as prime minister, Canada’s famous red-and-white maple leaf flag was born.

In addition to the maple leaf’s presence on various provincial flags and coats of arms, the country’s coinage has featured maple leaves, wreaths, and boughs in various forms for most of Canada’s history. In fact, the maple leaf was present on all Canadian coins from 1876 to 1901, and on Canadian pennies until 2012. mint.ca

Now: $114.95
Was:
Theme: 2013 Maple Leaf Impression with enamelValour, perseverance, diversity: the maple leaf is a powerful symbol of Canadian identity and values. Internationally recognized, the maple leaf has been...

Now: $125.00
Was: $154.95
The timeless shape of a maple leaf evokes the natural beauty of the Canadian landscape throughout the seasons—particularly in autumn, when maple leaves transform their surroundings with a spectacular...

Now: $108.96
Was: $139.95
Theme:This coin is the first in the Royal Canadian Mint’s exciting new series showcasing Canada’s magnificent maple trees from an entirely new and unique perspective, adding creative interest to this...

Now: $69.95
Was:
In commemoration of the 70th anniversary of D-Day, this finely detailed coin offers a unique first-person perspective of the peril faced by Canadian soldiers during their landing at Juno Beach. The...