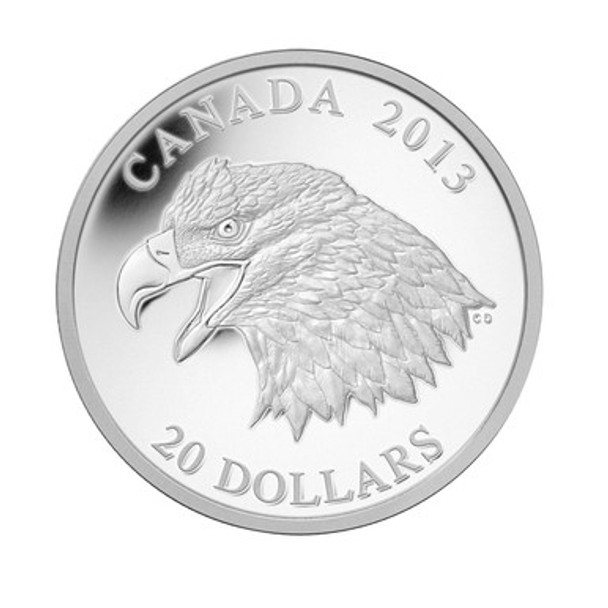 Description:
This 1-ounce fine silver coin is certified to be 99.99% pure silver with a diameter of 38 millimetres and a metal weight of 31.39 grams.
The reverse image by Canadian artist Claudio D’Angelo features a stunning profile portrait of a bald eagle head. Viewed from its left side, the striking raptor fixes the viewer with its legendary gaze, its wide eye staring powerfully below its snowy feathered brow. The intricate patterns of its white head feathers are rendered in dimensional detail by Royal Canadian Mint engravers. The eagle’s sharply curved beak is open to highlight its pointed curve. The reverse image is engraved with the word “CANADA,” the date “2013,” and the face value of “20 DOLLARS.” This coin also features unique edge lettering, with the words “1 OZ FINE SILVER 1 OZ ARGENT PUR” engraved around the edge of the coin.

The obverse features the effigy of Her Majesty Queen Elizabeth II by Susanna Blunt.

Portrait of Power
The amazing bald eagle—Haliaeetus leucocephalus—is Canada’s largest bird of prey and the only eagle exclusive to North America. An apex predator with no natural enemies, the bald eagle has long been a potent symbol of vision, power, and stoicism. The adult boasts a wing span of more than 2 metres, a standing height of about 1 metre, and an average weight of up to 7 kilograms. Females are generally larger than males. The renowned raptor is noted for its distinctive dark-feathered body and white-feathered head, large golden eyes, bright yellow beak, and massive yellow claws armed with sharp, powerful talons. This long-lived bird can survive nearly 30 years in the wild and even longer in captivity. Nesting in tall trees near large bodies of water and well away from human habitation, bald eagles survive on a diet of fish, birds, invertebrates, and small mammals, but are opportunistic feeders who will also steal from other predators and eat carrion.

Dominated by a massive, sharply curved yellow beak, the adult bald eagle’s distinctive head is covered to the neck with long, smooth white feathers. The arrangement of the feathers above its large golden eyes gives the adult eagle a frowning countenance that is perhaps a factor in the bird’s symbolic associations with power. The most important attribute on this iconic head, however, is the eyes. About four times more powerful than human sight, eagles’ vision, which is full-colour, has two focal centres, allowing the bird to see both in front and behindin a single glance. The eyes remain clean and moist with the help of translucent nictitating membranes that allow the bird to “blink” without disrupting its gaze. It is this gifted vision that empowers the eagle to spot relatively small prey underwater or in grassy plains while soaring hundreds of metres in the air—despite these prey animals’ natural camouflage.

The bald eagle breathes through “naris” or nostrils on each side of its large beak. The beak itself, though impressive in size and shape, is used almost exclusively for tearing food and does not play a major role in hunting or fighting—the tasks of the bird’s massive talons. The bald eagle is not a vocal bird; its call resembles that of a gull. Its hearing, though not as keen as its sight, is about the same as that of most humans.

Now: $70.00
Was: $89.95
Inventor Henry Seth Taylor designed this steam buggy, an adaptation of a horse drawn carriage in 1867. It is now on display at the National Museum of Science and Technology. This coin is presented in...

Now: $102.96
Was: $124.95
Canada is world-renowned for its forests, but none of these vast tracts of dense vegetation would exist without the life-giving nourishment of water and rain. Nowhere is this more evident than...

Now: $149.95
Was:
In the mighty rivers of British Columbia and Yukon, the salmon run is a spectacular natural occurrence and an awe-inspiring testament to one’s ability to persevere against all odds. This fine...

Now: $51.95
Was:
Experience Canada’s re-awakening in the spring! Once winter eases its hold, there’s a sense of new beginnings and renewed activity across the landscape, where the warming air seems to...