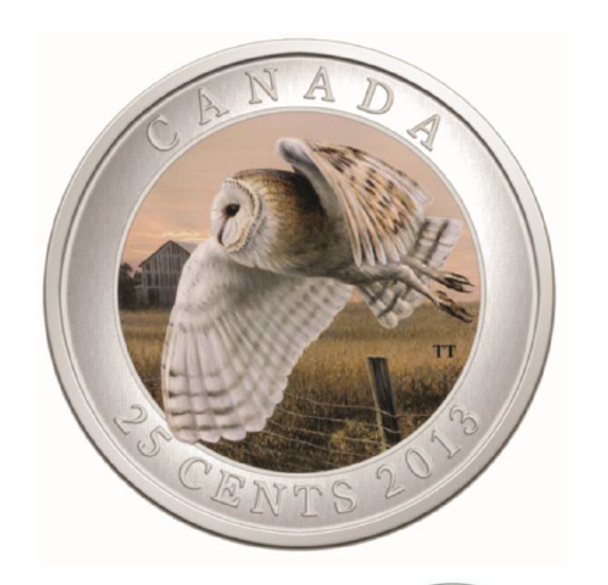 Theme:
Though found in geographies around the globe, the Barn Owl in Canada is an endangered species whose unique physical traits and exceptional hunting skills make it an exceptional member of the owl family.
Description:
This coloured cupronickel coin has a diameter of 35 millimetres. The reverse image, designed by Canadian artist Trevor Tennant, features a painted barn owl in full flight, viewed from its left side as it flaps its broad white and gold wings, perhaps readying itself to swoop in silence on its unsuspecting prey. The owl’s left profile is rendered to stunning effect, with the side of its distinctive oval face, snubbed beak and small, piercing black eye beautifully portrayed against the sunset. Its long legs and sharp talons are held aloft below its short, square tail feathers. In the background is a wire fenced field of tall grasses flanked, in the far background, by an abandoned barn—one of the barn owl’s preferred nesting spots. The pinkish sky of sunset meets the field on the horizon. The reverse is engraved with the word “CANADA,” the date “2013,” and the face value of “25 CENTS.” The obverse features the effigy of Her Majesty Elizabeth II by Susanna Blunt.
Selling Features:

The Barn Owl
In Hindu mythology, the goddess Lakshmi flies on the back of a Barn Owl (Tyto alba)—a symbol of wisdom and good fortune. This eye-catching raptor, though resident on every continent except Antarctica, is a relatively rare denizen of the Canadian wilderness.

Among owls, the Barn Owl is singular. Unlike its cousins, it does not hoot; instead, it makes a variety of odd sounds that include screams, screeches, and hisses. It is an adaptable bird that prefers to nest in tree cavities, holes in rock faces, and abandoned buildings but will also nest in attics, silos, and other occupied structures.

The Barn Owl’s appearance is striking. The small, wedge-shaped owl is approximately 30 to 45 centimetres in length, weighing between 200 and 700 grams. Its body is adorned with beautiful golden back, wing, and tail feathers. It has long legs, sharp talons, and a broad wingspan of up to one metre. Its otherworldly white, disc-shaped face is punctuated by two dark forward-looking eyes and a small beak. The Barn Owl does not have ear tufts.

Specialized serrations on its wing feathers allow owls to fly with preternatural silence. This nocturnal carnivore hunts from above, silently swooping down to capture its prey with its talons. Its exceptional low-light vision is ideally suited to its evening and night-time hunting habits, but it is the Barn Owl’s hearing that is truly exceptional, allowing the owl to precisely locate and capture prey in absolute darkness using only its hearing.

This exceptional hearing is aided by particular adaptions, including asymmetrically positioned ears. One ear sits at the height of its forehead and the other at the height of its nose.
The Barn Owl is not a truly migratory bird, although it is considered partially migratory in some geographies. Its habitats of choice include open meadows, grasslands, orchards, farmland and other places where mice, voles, and shrews are abundant. Research has shown that a group of two adults and their young can consume more than 1,000 rodents in a single season.
Found only in British Columbia and at the southernmost tip of Ontario, the Barn Owl is considered endangered in Canada despite its healthy presence in other geographies.

Now: $22.48
Was: $29.95
This eye-catching coin is the fourth in a series that pair engraved and painted flowers with a beautifully detailed rendering of an animal that is native to Canada’s natural landscape...

Now: $59.95
Was:
ThemeCanadians in nearly any region of the country can see this denizen of populated areas pulling worms from lawns and perched on high, singing its variety of lovely songs, throughout the...

Now: $28.00
Was: $49.95
The unique coast-dwelling Harlequin duck is a rare and lovely sight along Canada’s Pacific and Atlantic shores in winter, and among fast-moving inland streams in summer. This fourth coin in the...

Now: $28.00
Was: $59.95
ThemeCanadians in nearly any region of the country can see this denizen of populated areas pulling worms from lawns and perched on high, singing its variety of lovely songs, throughout the...

Now: $79.96
Was: $99.95
This exciting new coin series brings you the fascinating art of illusion to celebrate Canada’s natural heritage with unprecedented and utterly captivating designs. Each coin features an image...

Now: $89.95
Was:
Theme: Considered by many to be North America’s most beautiful waterfowl, the Wood Duck is a well-loved resident of southern Canada throughout the warm summer months. This unique duck nests in...

Now: $72.00
Was: $99.95
The first set in the Discovering Nature Series was issued to commemorate birds that are native to Canada. This is the first of eight sets totaling 32 coins. The are the first sterling fifty cents...

Now: $51.96
Was: $64.95
Named for its habit of pecking at its meal, the white-breasted nuthatch (Sitta carolinensis) is abundle of energy that thinks nothing of creeping down a tree headfirst, or hanging upside downfrom a...

Now: $92.96
Was: $112.95
Following an unprecedented era of expansion, the 20th century ushered in an era of consolidation and technological innovation in Canada’s railway history. The second coin in the Locomotives...

Now: $79.96
Was: $99.95
The fleeting beauty of a spectacular sunset inspires soul-stirring moments as many find themselves spellbound by the colour-soaked sky overhead. In its continuing celebration of weather phenomena...

Now: $22.48
Was: $29.95
This eye-catching coin is the fourth in a series that pair engraved and painted flowers with a beautifully detailed rendering of an animal that is native to Canada’s natural landscape...

$149.95
Now: $110.00
Was: $149.95
Theme:From sea to sea, Canada in autumn is blanketed with a stunning quilt of brightly coloured foliage. Own this ephemeral moment year-round with this beautifully painted fine-silver coin...