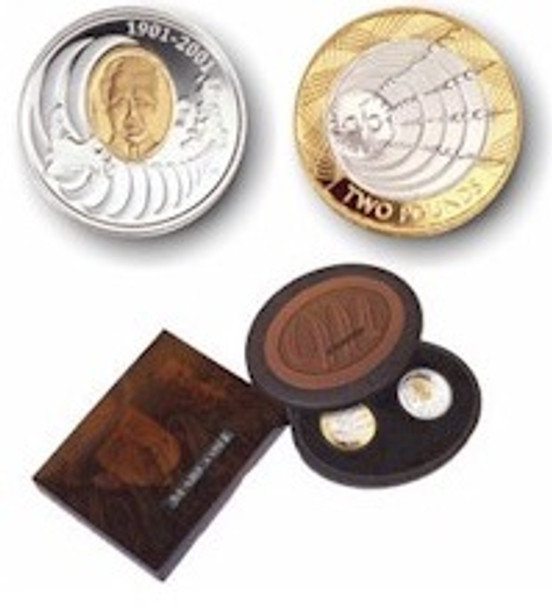 100th anniversary of the first wireless transmission five dollar coin, 1901-2001. On December 12th, 1901, Guglieimo Marconi (1874-1937) successfully transmitted the first wireless message across the Atlantic from Poldhu in Cornwall, England, to Signal Hill in St. John's Newfoundland. Issued to commemorate this anniversary the Royal Canadian Mint in conjunction with the Royal Mint, issued this two-coin set.

Now: $549.95
Was:
The year 2015 marks the 100th anniversary of the poem In Flanders Fields, which was written by Canadian physician Lieutenant Colonel John McCrae amid the horrors of the Second Battle of Ypres in...

Now: $81.00
Was: $99.95
The year 2015 marks the 100th anniversary of the poem In Flanders Fields, which was written by Canadian physician Lieutenant Colonel John McCrae amid the horrors of the Second Battle of Ypres in May...

Now: $98.88
Was:
2001 Snake $15 Lunar Silver/Gold Coin This year the 24-karat gold-plated central cameo features the Snake. Philosophical and strategic, the Snake possesses a natural charisma that can hypnotize. It...

Now: $24.95
Was:
Our next stop is the East Coast, where the cultural heritage of Ireland, Scotland, England & France come together to create the Newfoundland & Labrador Folk Festival. Founded on the...

Now: $29.95
Was:
THIS BRILIANT SILVER COIN COMES FROM THE FOLKLORE AND LEGENDS SEIRIS

Now: $24.95
Was:
Our next stop is the Arctic Circle, where Toonik Tyme celebrates the return of the sun to Nunavut - a life giving season of renewal that has been cherished by the Inuit for millennia. This new season...

Now: $129.95
Was:
The Marco Polo Built in Saint John, New Brunswick in 1851 by James Smith, the Marco Polo for a time was considered to be the fastest ship in the world and named the "Queen of the Seas." The Marco...

Now: $249.95
Was:
A CULTURAL CELEBRATION Post and the Royal Canadian mint are pleased to jointly commemorate the Lunar New Year with this exclusive year of the Dragon keepsake. This set features: Sterling Silver...

Now: $26.95
Was:
The coins are sealed inside a transparent plastic film and presented in a keepsake envelope. Accompanied by an enhancement card. Specifications: Mintage: 186,985 (includes both types of 2000 PL sets)

Now: $24.95
Was:
The Royal Canadian Mint invites you to join a fabulous and fun-filled three-year journey across Canada to celebrate the festivals unique to each province and territory. Come join in the fun! Our...