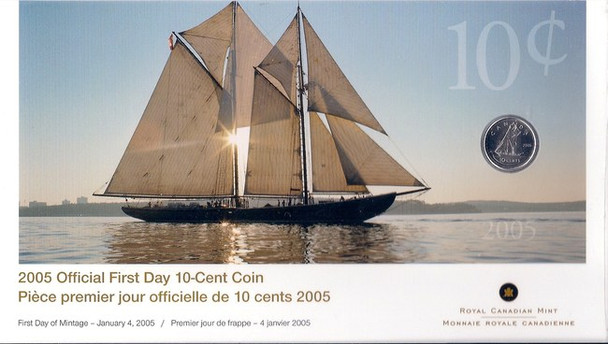 In 1920, the Halifax Herald newspaper established the International Fisherman's Trophy racing series for bona fide working ships. The Bluenose was built and launched in Lunenburg in 1921 to compete for the trophy and remained unbeaten for 18 years! The coin itself was made of nickel from 1968 to 2001 when it was changed to nickel plated steel. This coin is housed in a colourful illustrated folder.

Now: $19.95
Was:
2005 First Day Cover 50-Cent CoinCanada's 50-cent coin bears the Coat of Arms of Canada and honours our founding nations, England, Scotland, Ireland and France. The current Coat of Arms was designed...

Now: $19.95
Was:
2005 First Day Cover 25-Cent CoinFor over 50 years now, the 25-cent coin has depicted the caribou, an ideal representative of Canadian wildlife. This gregarious, curious animal is a familiar sight in...

Now: $19.95
Was:
2005 First Day Cover 5-Cent CoinThe beaver design on the 5-cent coin was first used in 1937. Widely recognized as an emblem of Canada, the beaver has adorned the shield of the Hudson's Bay Company,...

Now: $19.95
Was:
2005 First Day Cover 1-Cent CoinThe design featuring two maple leaves on a sprig was first used in 1937. The first one cent coin was struck by the Countess of Grey at the official opening of the...