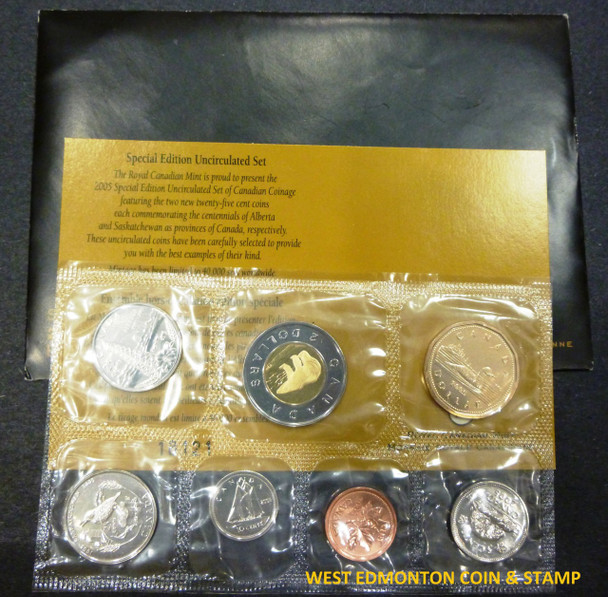 Celebrate the centennial for two of Canada's prairie provinces with this Special Edition Uncirculated Set. Alberta and Saskatchewan joined Confederation in 1905 - long after Nova Scotia, New Brunswick, Ontario and Quebec had formed the Dominion of Canada in 1867.

What's more, Canada had been feeling expansionist pressure from the United States and could now solidify its claim to the West by settling the land with wheat fields. Sowing wealth from the stubborn prairies was not for the faint of heart. Still, immigrants flooded in and those that came were strong and fiercely independent people.

A mosaic of cultures began to cover the prairies and as communities grew, so did the need for provincial self-government. After more than 30 years of confident growth, two provinces were created within the North-West Territory - Alberta and Saskatchewan.

Now: $69.95
Was:
The coins are Sealed inside a transparent plastic film and presented in a keepsake envelope. Each set contains penny, nickel, dime, twenty-five cent, fifty-cent, and dollar coins. Specifications:...

Now: $29.95
Was:
The coins are sealed inside a transparent plastic film and presented in a keepsake envelope. Accompanied by an enhancement card. Specifications: Mintage: 186,985 (includes both types of 2000 PL sets)

Now: $29.95
Was:
Carefully hand-selected numismatic versions of all seven Canadian circulation coins are presented in an illustrated keepsake envelope. All coins have a brilliant uncirculated finish, with the...

Now: $129.95
Was:
According to the legends of Canada's aboriginal peoples, every person has a "totem". Special characteristics they share with an animal, plant or inanimate object and which define their personal...

$129.95
Now: $98.00
Was: $129.95
More than any pope in history, John Paul II was a central force in world affairs, his active participation in contrast to the reclusive papacies before him. He was the first pope to visit Canada,...

Now: $26.95
Was:
Merry Christmas! This beautifully designed gift set will make the perfect stocking stuffer for the collector in your family. This gift set includes 6 Brilliant Uncirculated coins plus a coloured 25...

Now: $99.95
Was:
Prepare to be swept away by the most majestic sight at sea - Tall Ships! Ever since the World's first explorers began riding the wind to explore unknown horizons, tall ships have inspired us with...

Now: $26.95
Was:
The coins are sealed inside a transparent plastic film and presented in a keepsake envelope. Accompanied by an enhancement card. Specifications: Mintage: 186,985 (includes both types of 2000 PL sets)

Now: $774.04
Was:
One needs only to imagine the hustle and bustle of the barnyard to get an idea of what's in store for 2005. A place with a predictable routine, it affords a certain sense of security, but scrape away...