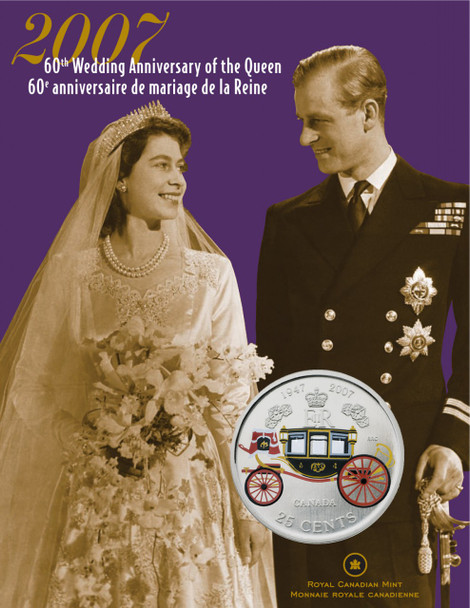 Celebrating Her Majesty Queen Elizabeth II on her 60th wedding anniversary Princess Elizabeth was just 13 years old when she met her future husband, Lieutenant Philip Mountbatten. A distant cousin of hers and Prince of Greece and Denmark, the handsome naval officer was often present at the social functions she attended.

Seven years later, they announced their engagement and the wedding was set for November 20, 1947. The couple was married at Westminster Abbey in London and the event proved to be an uplifting celebration for a nation eager to recover after years of war. Like any other young bride during that post-war era, Princess Elizabeth collected clothing coupons for her dress and the celebrations were fairly understated for such an important royal event, but that did not diminish the joy that was felt throughout the monarchy and by the people who watched the ceremony on television.

Now, 60 years later, Her Majesty Queen Elizabeth II and His Royal Highness, Prince Philip, Duke of Edinburgh will celebrate their diamond wedding anniversary. As one of the most enduring and best-known royal couples in history, they can be confident in the admiration and joy that will be felt throughout the world.

Special Features:
This 35 mm nickel plated steel coin celebrates The Queen's diamond wedding anniversary with a fully painted design of the magnificent Glass State Coach that transported her to Westminster Abbey on her wedding day. An extraordinary example of craftsmanship in glass, this coach has been traditionally used for all royal weddings since it was completed in 1881. Design approved by Her Majesty Queen Elizabeth II.

Packaging:
Coin is housed in a colourful, illustrated and serialized coin folder.

1998 $5 NORMAN BETHUNE 60TH ANNIVERSARY OF HIS ARRIVAL IN CHINA

Now: $149.95
Was:
In 1998 the Royal Canadian Mint produced a $5 silver coin to commemorate the 60th anniversary of Dr. Norman Bethune's arrival in China. The coin was issued as part of a two coin set, in conjunction...

Now: $69.95
Was:
This set comes with 4 uncirculated (straight from a roll) 1991 Canadian quarters Extremely scarce The Royal Canadian Mint only issued 459000 of these quarters the lowest issued quarter since 1934!...

Now: $39.95
Was:
2004 Holiday Gift Set - FIRST IN SERIES This gift set features Santa Clause painted on a quarter with red enamel paint along with all the other circulating coins. This is the hardest of all the...

Now: $34.95
Was:
Coin Roll in Original Wrap, Perfect for Collectors!

Now: $139.95
Was:
Canada is a land of amazing botanical diversity, yet some of the most popular flowers found in people’s homes and gardens are not “Canadian,” but imports brought here by...