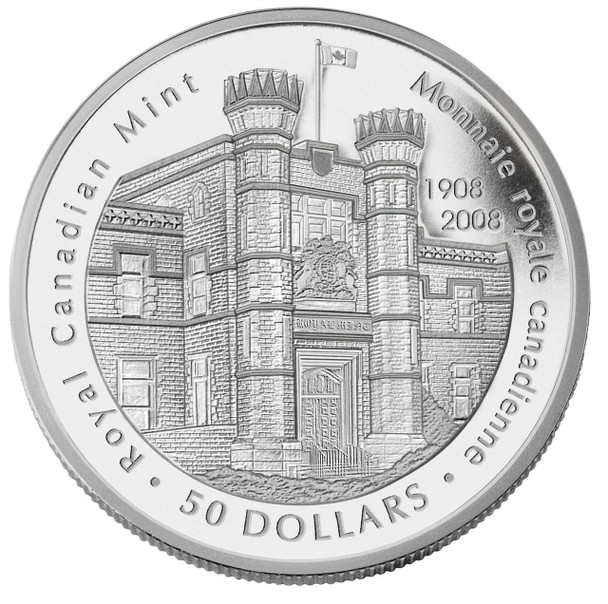 On January 2, 1908 the regal-looking building east of the Parliament Buildings in Ottawa (Ontario) was the scene of much pomp and pageantry. On hand were the elite from Canada's financial and political circles. History was made when Governor General Earl Grey struck the nation's first domestically-produced coin; a 50-cent piece. A few moments later, the first bronze cent was struck by Lady Grey.

For a young Canada, the opening of the Ottawa Branch for London's Royal Mint was a confident step forward, even if control over its coin designs and tools remained overseas. This began to change in 1931 when the Mint was transferred to the federal government and by 1936, the first "all-Canadian" coin designs still used today were circulating.

From the beginning, innovation has been the hallmark of the Mint with a revolutionary coin plating process, purest 99.999% numismatic gold coin and coloured circulation coin just a few of its internationally renowned "firsts."

In 1979, a new state-of-the-art facility in Winnipeg (Manitoba) took the automated production of circulation coins to new heights while the Ottawa (Ontario) location continued to focus on bullion (investment) and numismatic (collector) coins as well as refining/assaying services. Today, 100 years after its official opening, people still flock to the heritage building on Sussex Drive to see the captivating process of transforming metal into coins; the words "Royal Mint" above the entrance along with the Royal Coat of Arms that also appear at the entrances to the Peace Tower and Rideau Hall, echoing its enduring link with the United Kingdom.

This magnificent silver coin captures the essence of Canada's world-renowned mint on its centennial.

Exquisite craftsmanship and finish enhance the majestic architecture of this important heritage building.

Coin encapsulated and presented in a clamshell case lined with flock and protected by a black sleeve.

Now: $99.95
Was:
The Hudson Type 4-6-4* locomotive was introduced by Canadian Pacific in 1929 and its distinctive semistreamline design was developed during its first decade of service. Hudsons...

$179.95
Now: $139.00
Was: $179.95
Theme:Winter’s great masterpiece snow. It covers the ground in a great big hush; urging people to stop and breathe in its beauty. The most mundane objectstransformed into works of art while...

Now: $199.95
Was:
Tiny echoes of rain From the fresh new growth in spring to their ultimate expression of vibrant fall colour, the leaves of the maple tree enrich the Canadian landscape from coast to coast...

Now: $699.95
Was:
This impressive silver coin at a guaranteed weight of 5oz is a must for any coin collection. In addition the 65mm diameter allows for a remarkable amount of space to showcase this truly...

Now: $199.95
Was:
It is a discovery that sends hearts pounding and opens a window to the mystifying world of dinosaurs. Their fossilized bones testify to the massive beasts that once ruled the earth but disappeared...

Now: $299.95
Was:
2012 RCNA (Royal Canadian Numismatic Association) Proof Set. Limited to 200 sets worldwide NOT OFFERED THROUGH THE ROYAL CANADIAN MINTThis is a special addition 2012 Canadian proof set that was only...