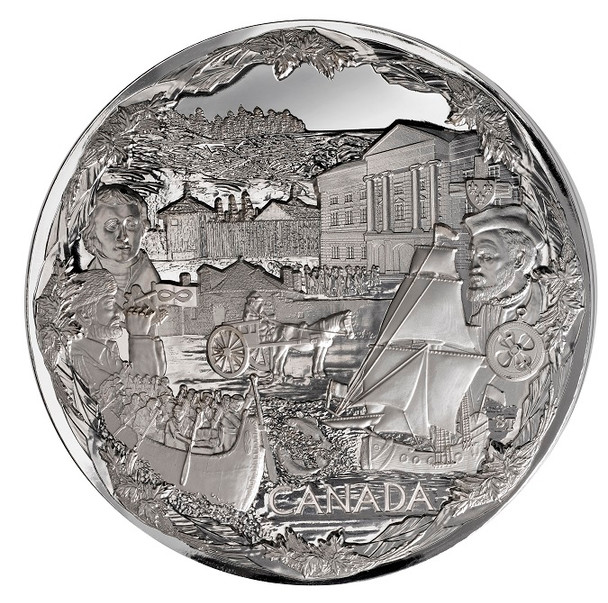 Never before has the Royal Canadian Mint issued coins containing one kilogram (2.2 lb) of 99.99% pure silver - a historic weight and mintage!

Along with the Fine Gold Kilo Coin, these unprecedented coins feature two designs that portray the story of Early Canada (2007) and Towards Confederation (2008), each masterpiece executed in both of these fine metals.
This coin depicts Canada's diverse Native heritage surrounded by a wreath of maple leaves, the internationally renowned symbol of Canada.

Only 2,500 Fine Silver Kilo coins will be available worldwide

The story behind the design of this masterpiece:

The design flows from east to west beginning in 1534, symbolized by a portrait of Jacques Cartier and a cross, claiming the land for France. Just below the portrait is an astrolabe representing explorer Samuel de Champlain. A rendition of the tall ship represents the British influence and the continuing French-English presence. This leads the eye to the centre of the design, which features Lower Fort Garry and the Red River Cart - a means of transportation over land and water. We see the M'tis flag featuring the infinity symbol representing the coming together of the two distinct cultures: European and Native.

To the lower left of the design are the Voyageurs travelling by canoe over the rapids, representing the development of the fur trade in Canada. Another major Canadian industry is represented by the salmon swimming upstream. Above the Voyageurs are images of David Thompson and Alexander MacKenzie representing the exploration and mapping of Canada to the Pacific coast. Beside MacKenzie is an image of Fort Langley, representing the west coast and trading posts, while above him is an image of the logging industry which used the river system for transportation.

The design comes full circle with the image of Province House in Prince Edward Island where the Fathers of Confederation met in 1867.

Now: $199.95
Was:
Tiny echoes of rain From the fresh new growth in spring to their ultimate expression of vibrant fall colour, the leaves of the maple tree enrich the Canadian landscape from coast to coast...

Now: $234.95
Was:
Strong, wise and hopeful, Canada embodies the ideals and aspirations of a nation that has proudly come into its own since its creation in 1867. Through the symbolic female figure featured on the...

Now: $69.95
Was:
In 1608, Samuel de Champlain landed on the shores of the St. Lawrence River at a place the Algonquin people called Kebek. "Where the river narrows" was a popular spot where they came to fish and to...

Now: $3,005.19
Was:
Designing a nation's character   During the Middle Ages, any knight who went into battle needed to distinguish friend from foe and would paint identifying marks on his shield. Later,...