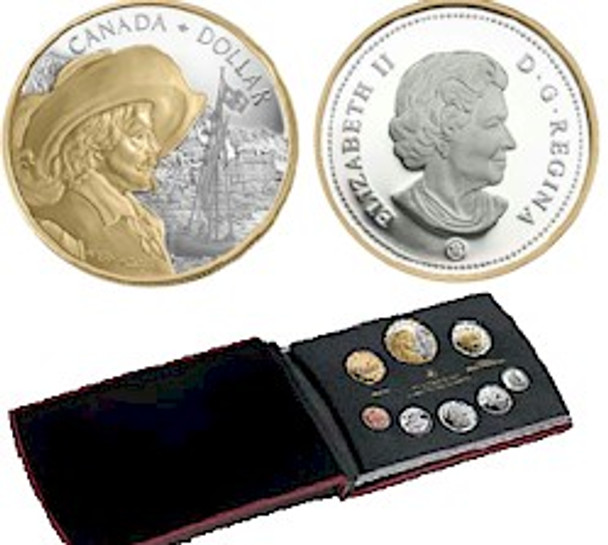 In 1608, Samuel de Champlain landed on the shores of the St. Lawrence River at a place the Algonquin people called Kebek. "Where the river narrows" was a popular spot where they came to fish and to barter. For nearly one hundred years prior, the French had tried to get a foothold on this part of the New World but were outmatched by scurvy, harsh winters and hostile natives.

Now, as Champlain surveyed this strategic point on the river, its natural harbour and aboriginal presence, he knew it was the ideal location for a fur trading post. Champlain's first habitation was a residence, warehouse and fort combined, complete with cannons, a palisade of wood stakes, a moat and a drawbridge. Within the year, it was a bustling enterprise where First Nations people came to trade furs for European goods.

As ships sailed the ocean and canoes paddled up and down river, Kebec became a bustling maritime city, the third largest in North America. By the mid 1800's, it was a major outlet for lumber and soon added wheat to its exports. But the city's unique character attracted more than industry. Two hundred years ago, wealthy tourists were already writing about this "masterpiece of art and nature" in their memoirs.

Now as the only walled city in North America celebrates its 400th year, visitors have an enviable opportunity to literally step into the past and listen to the echoes of history from within its walls.

Special Features:
It is the first such set to feature the commemorative silver dollar selectively gold plated on both the reverse and the obverse. The elegant book-style packaging, with removable lens, splendidly complements these fine coins.

Now: $49.95
Was:
1987 Proof SetSet comes in a black box with red satin interior. In addition to the new Loon dollar coin, this set contains the silver dollar commemorating the 400th anniversary of John Davis'...

Now: $89.95
Was:
1996 Proof SetBeginning in 1996, the five cent, ten cent, twenty-five cent and fifty cent coins were struck in sterling silver. All other specifications remain the same as the older Prestige/Proof...

Now: $279.95
Was:
Canada's history is rife with tales of explorers, and the seafaring Captain James Cook (1728-1779) is one of the most storied of all. From the Bering Strait to the Antarctic Circle, and many of the...

Now: $109.95
Was:
In June 1604, Samuel de Champlain and Pierre du Gua, sieur de Mints were exploring the Atlantic coast in order to establish the first settlement that would solidify France’s rights to this...