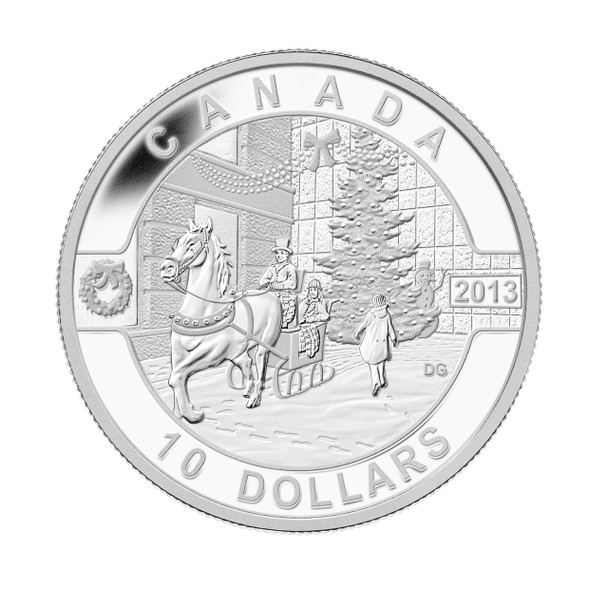 Description:
The reverse design by Canadian artist Doug Geldart presents the scene of a Canadian city street in the winter holiday season. Against the angular backdrop of modern glass and stone buildings, the traditional symbols of the holidays come to life. On the left side of the image, a horse-drawn sleigh passes along the snow-covered street, its top-hatted driver dressed in traditional garb and its smiling traveller dressed in toque, scarf, and mitts and warmed by a striped blanket. From the right, a bundled-up pedestrian crosses the street as the sleigh passes. In the background, a snowman seems to wave from behind the right side of a tall holiday tree decorated with garland and lights. A ribboned banner rises above the quaint streetscape.
Special

Packaging:
Each coin is encapsulated and presented in a maroon clamshell case lined with flock and protected by a customized full color sleeve.

Canada’s national identity is much like its majestic landscape: diverse, storied, and sometimes elusive. In the ever-changing tectonics of Canadian culture, identifiers tend to reflect the nation’s natural assets and social and political institutions. Born of this complex background, Canadian icons are distinct because they carry meaning for all Canadians, regardless of where we live or how we came to be here. These are the images that plumb the depths of Canadian pride and kindle Canadians’ love for their home.

Where Modernity and Tradition Meet

Canada is a land that embraces contrasts. Its landscape hosts nearly every possible natural form, from coastal oceans and forests to western and eastern mountain ranges, southern deserts, central prairies, cross-country boreal forest, northern tundra, and the frozen ice fields of the High Arctic. Its people are equally diverse. From First Nations cultures to the varied heritages of those who settled the land throughout the country’s colonial and modern history, Canada supports the cultural traditions of its citizens as well as a shared way of life.

This welcome mix of diversity and heritage is particularly evident in Canadians’ celebrations of the winter holiday season. In cities, towns, and villages across the country, we see elements of the historical past intertwined with a steadfastly modern worldview. In the cold dark of the Canadian midwinter, it is only natural that ancient rituals rooted in a hastening of the return of light and warmth would emerge in various forms. Many cultures on the planet share this practice of celebrating life and light, and each has brought their tradition to Canada in its own way.

In the nation’s capital, Ottawa, Parliament Hill becomes a sparkling garden of light during the holiday season, kicking off nationwide light festivals. In Toronto, holiday parades draw enormous crowds. In Old Montreal, choral performances ring through the cobbled streets while outdoor celebrations and fireworks light up a city that thrives in winter. In St. John’s, celebrants dressed in brightly coloured costumes get up to mummering-style mischief. Saskatoon comes alive with craft fairs, light shows, and decorated trees. Vancouverites watch their city glow from high atop Grouse Mountain. And in Iqaluit, Inuktitut-speaking revelers stave off the frigid cold in bright halls, step dancing and playing traditional Inuit games.

A Canadian Icon
The near guarantee of at least some holiday snow in most regions of Canada makes traditional images of snow-covered, sleigh-filled holiday scenes particularly poignant here. In a multicultural society with numerous cultural and religious traditions, Canada is home to a plethora of seasonal holiday celebrations. And whatever a particular group’s reasons for celebrating, we can all unite under the banner of warmth, comfort, and community—traditional Canadian values that seem even more important during the long cold dark of winter.

Now: $49.95
Was:
The Inukshuk - your 1st coin Your first coin in the O Canada series features an Inukshuk in raised relief and framed against icy mountains and a frigid, frozen sea. Look closely at the background...

Now: $139.95
Was:
The unmistakable black-and-white orca (Orcinus orca) is an awe-inspiring emblem of Canada’s Pacific Coast, and is known for the strong family bonds that are at the heart of the tight-knit...

Now: $99.95
Was:
The beaver is one of Canada’s most beloved and iconic animals, one that is forever tied to Canada’s early history. Known for its persistence, resourcefulness and hard work, the...

Now: $139.95
Was:
A symbol of this country’s vast wilderness, the iconic Canada goose (Branta canadensis) holds a special place in the hearts of many Canadians as a time-honoured harbinger of seasonal change;...

Now: $99.95
Was:
From sea to sea, Canada in autumn is blanketed with a stunning quilt of brightly coloured foliage. Own this ephemeral moment year-round with a beautifully coloured fine silver coin—the second...

Now: $39.95
Was:
The eighth coin in the Royal Canadian Mint’s exciting 2014 O Canada series focusing on iconic Canadian images, this coin features one of Canada’s most potent wildlife symbols: the ancient...