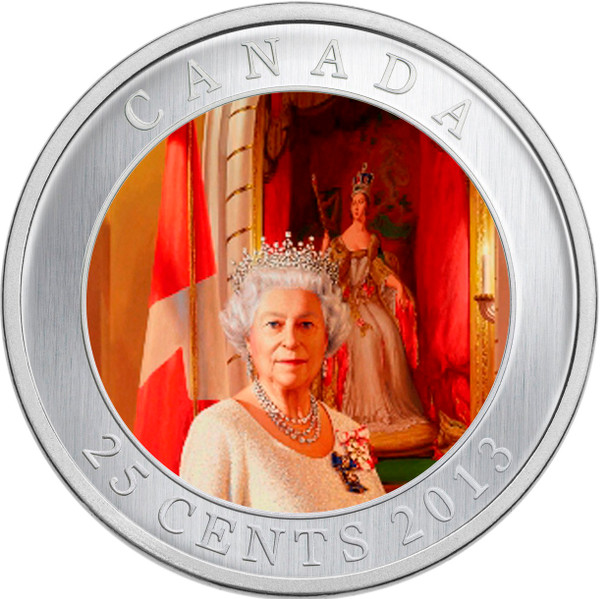 Theme:
The year 2013 marks the 60th anniversary of the Coronation of Queen Elizabeth II. To commemorate this special occasion, the Royal Canadian Mint is proud to present this coin that celebrates Her Majesty.

Packaging:
Diamond Jubilee Portrait of Her Majesty Queen Elizabeth II by Phil Richards
Coin is encapsulated and presented in a Royal Canadian Mint-branded maroon clamshell case lined with flock and protected by a black sleeve.

Tradition and Tranquility: The 2012 State Portrait of Her Majesty Queen Elizabeth II
On a rainy Tuesday morning in London, England, on June 2, 1953, 26 year-old Queen Elizabeth II began her horse-drawn Coronation procession along the Thames River from Buckingham Palace to Westminster Abbey. In 2013, Her Majesty Queen Elizabeth II celebrates the sixtieth anniversary of her Coronation—one of the most important moments in the life of the British monarch, connecting her to a thousand years of history. Six decades later, this unique moment also granted a Canadian portrait artist the opportunity to realize one of his greatest dreams.

Toronto-based artist Phil Richards learned in 2010 that he had been selected by the Queen herself from five Canadian artists to paint an official portrait of Her Majesty. Two years and hundreds of hours of intensive work later, Richards accompanied Canada’s Governor General and Prime Minister to England to unveil the portrait in the presence of Her Majesty at Buckingham Palace during the 2012 Diamond Jubilee week.

Richards, well known as a portrait painter with rigorous standards followed a labour-intensive process to produce the portrait. This process was made even more complex by the unique challenges of portraying a subject with whom he had very limited access. Richards only met with Her Majesty twice before completing the portrait. The painting process thus included the creation of miniature three-dimensional models of the composition, numerous detailed maquettes, the use of computer-generated imagery, and an architectural model of the setting in Rideau Hall.

The final framed acrylic-on-canvas portrait measures 328 by 224 centimetres. The basswood frame is gilded in 23-karat gold leaf. The symbolically rich composition centres on the Queen, elegantly dressed in white, standing at a desk in front of an arched doorway in Ottawa’s Rideau Hall. In her right hand, Her Majesty holds a pair of satin gloves. She wears a diamond tiara and the badges of her Canadian honours, as well as sparkling diamond jewellery. In the background is a portrait-within-a-portrait of Her Majesty’s great-great-grandmother, Queen Victoria, who signed the British North America Act that became the Canadian Constitution in 1982 during Elizabeth II’s reign. In the portrait, the British North America Act lays against two ink pots from the Victorian eraThe Queen’s left hand, which rests on the desk, points to the Act. In addition to the images of Queen Victoria and the British North America Act, Richards was required by the Government of Canada to include a Canadian flag. He added other symbolic elements as well, such as a vase featuring Her Majesty’s Canadian Diamond Jubilee emblem, a pink Queen Elizabeth rose, and six lights representing each decade of the Queen’s reign. Richards even secretly included two corgis in the carved finial at the top of the chair on Her Majesty’s left side—a secret detail that delighted the Queen when she saw the final piece.

Today, the portrait hangs in the ballroom of Rideau Hall, the official residence of the Governor General, in Ottawa.

Now: $119.96
Was: $149.95
Her Majesty Queen Elizabeth II is the first monarch to be crowned ‘Queen of Canada’ and it is our first time to portray her on a repoussé-inspired coin. Queen Elizabeth’s...

Now: $29.95
Was:
A perfect gift for BC Lions fans! While supplies last! The BC Lions* have many reasons to celebrate in this 100th Grey Cup® year. Your commemorative stamp relives 1994’s thrilling...

Now: $21.96
Was: $24.95
Theme:The year 2013 marks the 60th anniversary of the Coronation of Queen Elizabeth II. To commemorate this special occasion, the Royal Canadian Mint is proud to present this coin that celebrates Her...

Now: $24.95
Was:
Theme:Canada in bloomFlowers appeared on Earth about 130 million years ago—and their arrival was dramatic, transforming a monochromatic world of green ferns and cone-bearing trees into a...

Now: $24.95
Was:
Theme: Welcoming the Royal infant! The arrival of the newest member of Canada’s Royal Family reigns as one of the most anticipated events for 2013.After months of careful planning and...