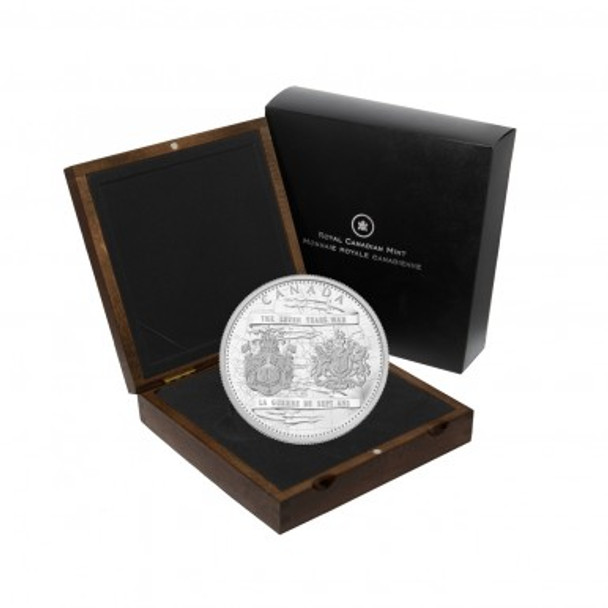 Theme:
Mapping the legacy of war

This 250-dollar coin is certified to be 99.99% fine silver with a diameter of 102.1 millimetres and a metal content of 1,000 grams. Canadian artist Luc Normandin designed the reverse which features a period map inspired by Didier Robert de Vaugondy, a renowned map maker of the mid 1700’s. The map shows the region where the Seven Years War was fought in North America and is accompanied by a commemorative banner at the coin’s centre that is flanked by the Royal Arms of France (left) and Britain (right). The obverse features the effigy of Her Majesty Queen Elizabeth II by Susanna Blunt.

Packaging:
Coin is encapsulated and presented in a custom maple wood box lined with flock and protected by a black sleeve.

Mapping the legacy of war
250th anniversary of the end of the Seven Years War (1756 – 1763)
The map of North America is a veritable history book on the societal evolution of the continent. With place-names that can be traced to a multitude of European and Aboriginal cultures, it reveals the diversity of people who played a role in this epic tale that spanned centuries—the French, British, Spanish, Portuguese, Dutch, Swedish, Danish and First Nation peoples.

But it was the three super powers of the age that yielded the greatest influence on the map’s formation. After warring for centuries for domination in Europe, they set their sights on North America. Spain colonized the continent from the South, the British along the Atlantic Coast and the French expanded inland via the St. Lawrence Valley and the eastern seaboard.

As ships crossed the Atlantic Ocean, they had more than sailors, soldiers and guns on board. They also carried merchants, farmers, fishers, peasant families and adventurous traders all eager to enjoy the freedom and prosperity the New World offered. Yet, as they toiled to build new lives, they did so against an undercurrent of hostility between their homelands and the constant threat of war.

By the 18th century, the conflict was primarily between Britain and France—and it intensified with far-reaching, grasping arms. The early colonists who were primarily concerned with harvesting a livelihood from the land and sea were invariably drawn into the conflict, as were First Nations people who had long-standing alliances with the Europeans, but were equally interested in protecting their own interests.
After two years, the struggle reached a breaking point when open warfare broke out in the Ohio Valley. Britain officially declared war on France one year later in 1756, and the war that ensued became one of history’sgreatest wars since the fall of the Roman Empire. The Seven Years War was the world’s first global conflict extending far beyond North America to Europe, India and Africa.

In North America, the English colonies along the eastern seaboard, and the French forts extending from the St. Lawrence River to the Great Lakes and south beyond the Ohio Valley, determined how the war would be fought as the opponents struggled to control each stronghold. When the conflict ended in 1763, the lives of North America’s early citizens changed forever as new boundaries were drawn up. Yet, the foundation was laid for Canada as the world knows it today—the lands that define the nation, as well as the linguistic and cultural diversity of its people.

Now: $2,288.88
Was:
The year 2016 is ruled by the Monkey, the Chinese zodiac that most closely resembles humankind. The Monkey personality is supremely intelligent and charismatic, with boundless agility. He is highly...

Now: $2,288.88
Was:
The year 2015 is ruled by the Sheep. The creative Sheep personality embodies wealth, warmth and loveliness. Good things seem to come to the Sheep naturally because of its irresistibly good nature...

Now: $49.95
Was:
Theme:The War of 1812 was a fundamental turning point in Canada’s development as a nation; the stories and the heroes that arose from it have become enduring elements of the Canadian story...

Now: $24.95
Was:
Theme:The year 2013 marks the 60th anniversary of the Coronation of Queen Elizabeth II. To commemorate this special occasion, the Royal Canadian Mint is proud to present this coin that celebrates Her...

Now: $69.95
Was:
The hummingbird and the Morning Glory are two perennially beautiful fixtures of the Canadian garden in summer. Here, they are joined in exquisite harmony around a sparkling red Swarovski crystal...

Now: $24.95
Was:
Theme:Canada in bloomFlowers appeared on Earth about 130 million years ago—and their arrival was dramatic, transforming a monochromatic world of green ferns and cone-bearing trees into a...

Now: $24.95
Was:
Theme: Welcoming the Royal infant! The arrival of the newest member of Canada’s Royal Family reigns as one of the most anticipated events for 2013.After months of careful planning and...