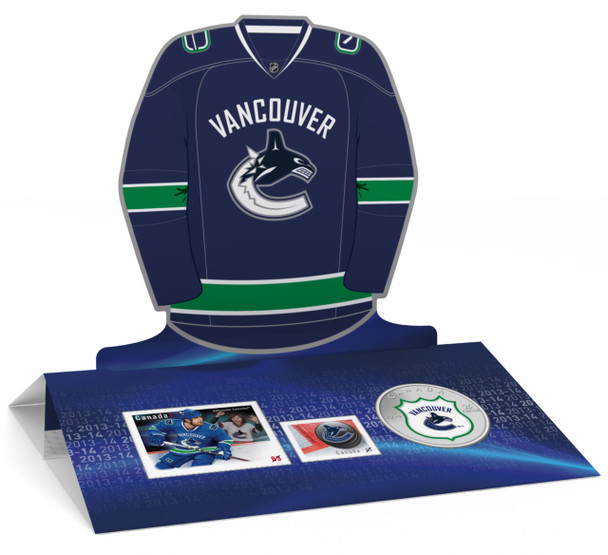 Description:
This painted cupronickel coin has a diameter of 35 millimetres. The reverse design features a coloured team logo in colour captured within the NHL shield on a frosted background. The reverse features the word “CANADA,” the date “2014,” and the face value of “25 CENTS.” The obverse features the effigy of Her Majesty Queen Elizabeth II by Susanna Blunt.

Packaging:
Coin is presented in a folder which pops up to showcase the team’s jersey! This set also comes with two commemorative stamps.

Although the Vancouver Canucks played their first season in 1970-71 as an NHL expansion team, Vancouver fans are no strangers to hockey. Beginning as early as 1911 with the Vancouver Millionaires, hockey has been played almost continuously at the elite level in Vancouver for more than a century. Today, more than 40 years after their first NHL game, the Vancouver Canucks are regular playoff contenders and the recipients of numerous league-leading awards and honours.
NHL and the NHL Shield are registered trademarks of the National Hockey League. All NHL logos and marks and NHL team logos and marks depicted herein are the property of the NHL and the respective teams and may not be reproduced without the prior written consent of NHL Enterprises, L.P. © NHL 2013. All Rights Reserved.

Now: $39.95
Was:
2014 Coin and Stamp set featuring the Calgary Flames. Description:This painted cupronickel coin has a diameter of 35 millimetres. The reverse design features a coloured team logo in colour captured...

Now: $39.95
Was:
2014 Coin and Stamp set featuring the Ottawa senators. Description: This painted cupronickel coin has a diameter of 35 millimetres. The reverse design features a coloured team logo in colour captured...

Now: $1,099.95
Was:
DESCRIPTION  Admire each unique pure silver miniature of the Sith Lord™ himself, Darth Vader™. Using a guaranteed minimum of 150g of .999 silver this menacing design, by 3D master...

Now: $7.00
Was:
The 2020 $2 Bill Reid Commemorative circulation coin is a celebration of the Haida artist's legacy and of Haida culture.