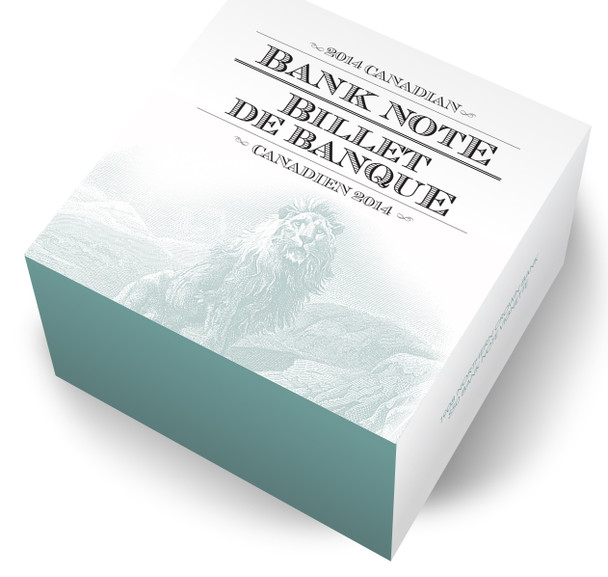 More than 30,000 years ago, ancient humans painted prides of hunting lions on cave walls. From these earliest moments, the lion emerged as an emblem of protection, military might, royalty, and supernatural power. Today, the lion is one of the most common heraldic symbols, used in the emblems, arms, and currency of hundreds of nations worldwide.

DESIGN:
The reverse features a re-creation of the stunning portrait of a lion taken from an early twentieth century vignette created by the British American Banknote Company. The King of the Jungle is brought to life in painstaking detail as Royal Canadian Mint engravers capture the characteristic line engraving of early banknote design. Augmenting the masterful work of the original engraving, here the distinctive curve of each muscle and strand of fur, the striking shading of the lion and his dramatic mountainous surroundings, and the minute detail of the scrollwork and lettering are taken from original banknote designs and rendered in pure silver. The face value is framed in scrollwork adapted from an early banknote design, for a beautifully classic effect.

Now: $99.95
Was:
This striking coin celebrates the peregrine falcon, an agile and high-speed hunter that contributes to Canada’s rich biodiversity. SPECIAL FEATURES:Composition: 99.99% pure...

Now: $69.95
Was:
Celebrate a Canadian literature icon and the winner of the 2013 Nobel Prize in Literature. The Royal Canadian Mint proudly celebrates the prolific writing career of Canadian author Alice Munro, whose...

Now: $89.95
Was:
The cougar is one of Canada’s most powerful, elusive, and beautiful predators. This silent hunter is the perfect subject for the Royal Canadian Mint’s stunning new 5-coin set. Like the sleek female...

$117.95
Now: $103.80
Was: $117.95
In the waters off Canada’s coasts, the sudden apparition of a breaching whale is a powerful sight to behold. Twisting and arching as it soars through the air, the humpback whale (Megaptera...

Now: $104.95
Was:
Canada’s largest wild feline is a rare sight in the forests of Western Canada — but only because of its secretive nature. The third coin in our Canadian Mosaics series offers a chance...

Now: $289.95
Was:
In 1967, the Royal Canadian Mint celebrated Canada’s centennial with a unique set of circulation coins that bore animal-themed designs by acclaimed artist Alex Colville. Now, as Canada...

Now: $89.95
Was:
The hum of summer It is one of summer's most animated sights; a hummingbird flitting about the garden—up, down, left, right, even backing up -- often hovering in one place...

Now: $749.95
Was:
Highlights: By undertaking the technical complexities of producing a niobium coin, these Royal Canadian Mint 'firsts' set the bar high for unmatched color and luster. Each niobium core was...

Now: $3,485.70
Was:
11th issue in this bi-annual series. Continue collecting this beautiful series! The Coat of Arms for Ontario incorporates the Provincial Shield that was originally granted by Queen Victoria in 1868...