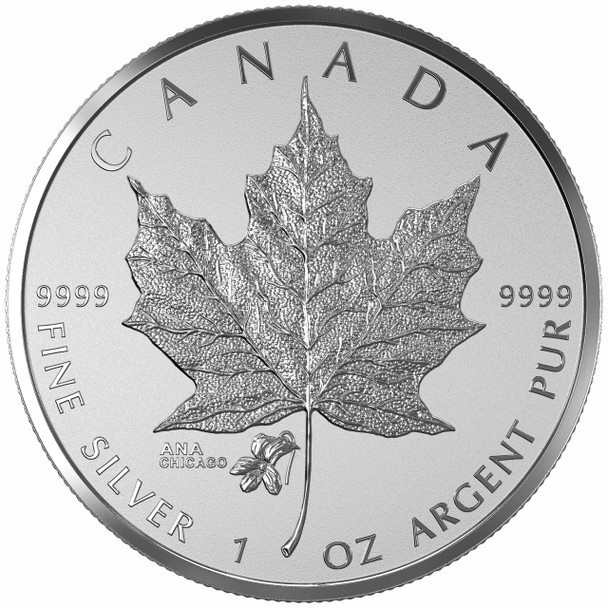 Since its introduction in 1988, the Silver Maple Leaf has become one of the most well known bullion investment coins in the world. Investors and collectors alike have prized it for its quality, purity and value, along with the intricacy of its design. With this reverse proof silver numismatic coin, the Royal Canadian Mint celebrates its success while also paying tribute to the American Numismatic Association, host of the 2015 World’s Fair of Money.

DESIGN
Unchanged from each bullion coin issued annually, the iconic maple leaf—that mighty national symbol of Canada, its people and its pride—is featured on the reverse of this fine silver numismatic coin. Intricately engraved in fine detail, the single leaf’s serrated edges and deeply veined lobes are rendered in a way that adds texture to the leaf, which shimmers in a brilliant finish set against the frosted background. The official flower of the state of Illinois, the Purple Violet (Viola sororia), is micro engraved on a small area of the reverse Remarkably detailed on such a small scale, this unique privy mark stands as a celebration of the Mint’s attendance at the 2015 ANA World’s Fair of Money in Chicago, Ill., as further indicated by the engraved acronym “ANA” and the word “CHICAGO”.

Now: $74.95
Was:
Hockey’s enormous popularity in Canada has been fed for nearly a century by the National Hockey League®. To celebrate “our game,” the Royal Canadian Mint is proud to launch the 2015 edition of...

Now: $129.95
Was:
Since its introduction in 1988, the Silver Maple Leaf has become one of the most well known bullion investment coins in the world. Investors and collectors alike have prized it for its quality,...

Now: $15.00
Was:
This listing is for the subscription box ONLY, coins are sold separately. A unique musical display with colourful the images of the birds. When opened, it plays the harmonious sounds and songs of...

Now: $399.95
Was:
This selectively gold-plated 99.99% pure silver dollar is the second in the Royal Canadian Mint's series celebrating historic proof dollar designs. This release features the design from Canada's 1976...