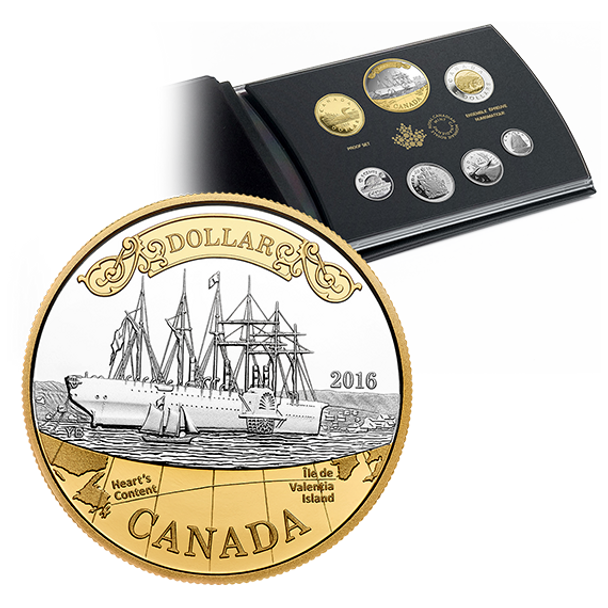 On July 27, 1866, a new era of global communication began as S.S. Great Eastern steamed into Heart’s Content, Newfoundland, to complete a link that could relay messages quickly between the Old World and the New. This fine silver proof dollar commemorates the 150th anniversary of that transatlantic telegraph cable, which revolutionized communications while transforming Newfoundland into an international hub.

DESIGN
The reverse design by Canadian marine artist Yves Bérubé features a starboard side view of S.S. Great Eastern as the iron steamship triumphantly rests in the harbour of Heart’s Content, Newfoundland. Painstakingly engraved in exceptional detail, the Great Eastern easily dwarfs a local gaff-rigged fishing boat (known as a Jack Boat) off her bow, while her four funnels and six masts rise up to fill the upper portion of the reverse. In the background, the picturesque fishing village and the rolling hills that surround Trinity Bay are a welcome sight, signalling the end of one journey for the crew after spending weeks laying the transatlantic cable along the North Atlantic seabed. This historic cable linking Heart’s Content to Valentia Island, Ireland, is illustrated on the map element that fills reverse’s lower portion. Fittingly, the cable itself is represented on the map.

Now: $269.95
Was:
No other symbol is as synonymous with Canada as its distinctive red-and-white flag. To Canadians at home and abroad, the red maple leaf unites us and instills a sense of belonging regardless of our...

Now: $279.95
Was:
2016 RCNA (Royal Canadian Numismatic Association) Proof Set (Numbered 142 of 200) Limited to 200 sets worldwide! NOT OFFERED THROUGH THE ROYAL CANADIAN MINT   This is a special additi

Now: $109.95
Was:
In June 1604, Samuel de Champlain and Pierre du Gua, sieur de Mints were exploring the Atlantic coast in order to establish the first settlement that would solidify France’s rights to this...