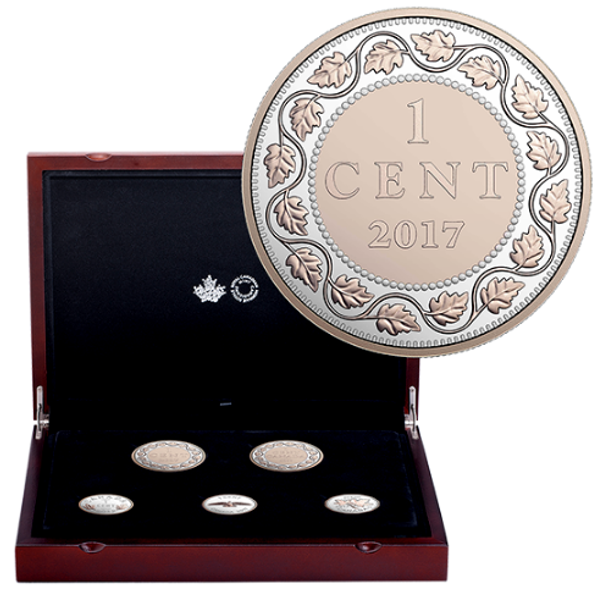 Own all of the designs of the penny in one set! This stunning 5-coin set commemorates the 5th anniversary of the end of the penny’s production. Using multiple sized and shaped blanks, we have based the coins’ designs on the changing faces of Canada’s 1-cent piece from its first striking in 1908 to the denomination’s end in 2012. Each beautifully rendered replica features selective pink gold plating on the obverse and reverse to mimic the copper colour of the originals. 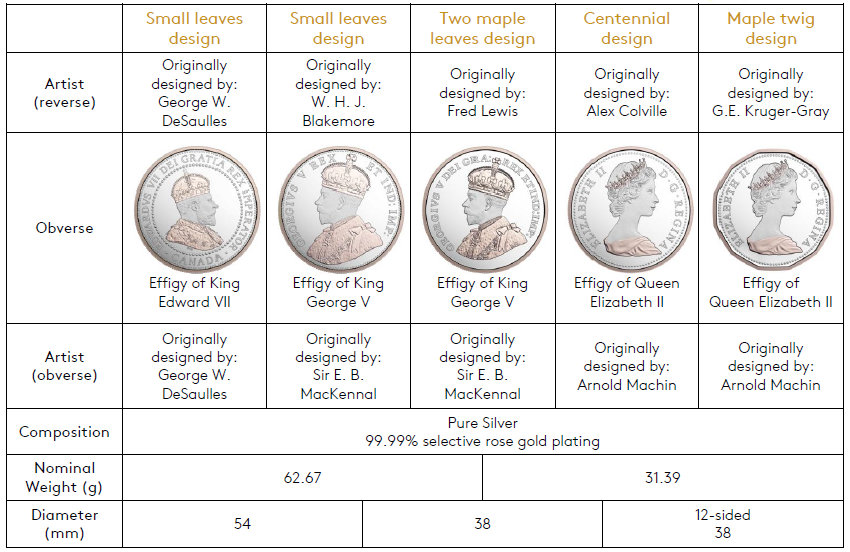 DESIGN
This set of 99.99% pure silver coins selectively plated in pink gold features two 2-ounce coins and three 1-ounce coins. The two 2-ounce coins have a diameter of 54 millimetres. The three 1-ounce coins have a diameter of 38 millimetres. The face value for all five coins is 1 cent. The 2-ounce coins feature the original reverse design from Canada’s 1908 1-cent piece: a vine-like wreath of 16 maple leaves framing a centre field engraved with the face value. The wreath is framed on both sides with raised dots. The 1-ounce coins feature the original reverse designs from 1920 and 1967, and the 12-sided design from 1982. The 1920 replica features two maple leaves on either side of the reverse field, flanking the face value. The 1967 coin features Alex Colville’s iconic rock dove. The 1982 replica features G.E. Kruger-Gray’s maple leaf twig, originally introduced in 1937. Its 12-sided design recalls the shape of the penny from 1982 to 1997. The obverse of each coin will have their original effigies.

Now: $109.95
Was:
Throughout its history, each of the nickel’s transformations provides a glimpse of a young nation that was seeking to define itself, and a Mint that would come into its own. This Legacy of the...