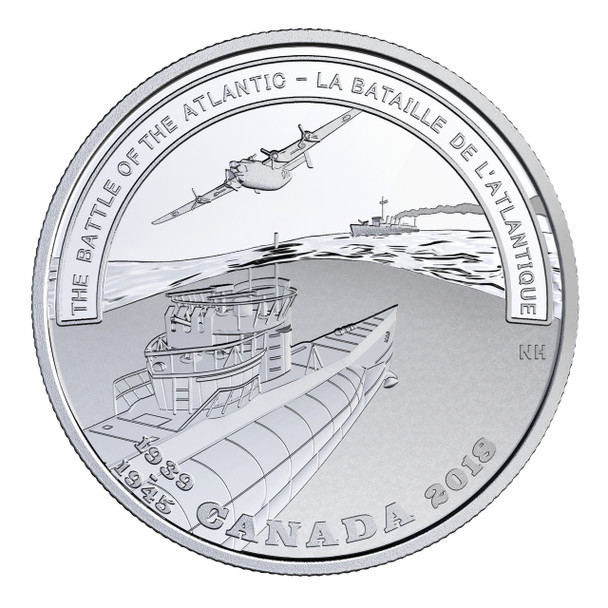 Throughout the Battle of the Atlantic (1939-1945), Canada and its rapidly expanding fleet of aircraft and ships were on the frontlines, shepherding vital convoys through waters fraught with danger from above and below. After periods of devastating losses, an Allied offensive in May 1943 dealt a significant blow to the U-boat fleet in the North Atlantic; on the 75th anniversary of this pivotal year, the fifth coin in our Battlefront Series reflects on the hardships endured by thousands of Canadians who served in the longest continuous campaign of the Second World War.

The reverse design by Canadian artist Neil Hamelin captures the intensity of the Battle of the Atlantic and conveys a real sense of the dangers faced by those who sailed the seas between 1939 and 1945.
Split between an above-water and an underwater perspective, the ominous scene re-creates the moments before the tragic sinking of HMCS St. Croix on September 20, 1943. In the skies overhead, an angled B-24 Liberator is representative of the Very Long Range (VLR) anti-submarine aircraft that provided air support and helped turn the tide of war in the mid-Atlantic. Bearing the markings of Royal Canadian Air Force Squadron 10, the aircraft patrols the waters south of Greenland and Iceland, where it has signalled the presence of a U-boat to the St. Croix.
From beneath the rolling waves, U-305 surfaces to periscope depth and spies the St. Croix sailing towards them bow, a trail of smoke emitted by the aft exhaust stacks. The Royal Canadian Navy destroyer has pulled away from escorting the ONS-18/ON-202 convoy to investigate the potential threat; but the U-305 would waste little time in firing GNAT torpedoes that would strike the St. Croix’s aft, and another later on that would cause the ship to sink in just three minutes. Sadly, from a complement of 143 crewmembers and 10 officers, 81 survivors of St. Croix were rescued by HMC Itchen, which was herself sunk by a U-boat just three days later.
The reverse includes the engraved words “THE BATTLE OF THE ATLANTIC – LA BATAILLE DE L’ATLANTIQUE”, the commemorative dates “1939 – 1945”, the word “CANADA” and the year of issue, “2018”. The obverse features the effigy of King George VI by T. H. Paget.

Now: $129.95
Was:
On the morning of July 1, 1916, the 1st Newfoundland Regiment advanced upon enemy lines near the French village of Beaumont-Hamel; within a half-hour, all but 68 of the 801-man regiment were cut down...

Now: $94.95
Was:
During the Second World War, Bomber Command operations over Occupied Europe, Germany and Italy represented Canada’s biggest air commitment abroad, where tens of thousands of Canadians served in...

Now: $94.95
Was:
Outnumbered and less equipped than the enemy, the odds were not in the Canadians’ favour in December 1941 as they fought valiantly to defend the British Crown Colony of Hong Kong until the very...

Now: $114.95
Was:
They were Canada’s Hundred Days: From August 8 to November 11, 1918, Canadian troops cemented their reputation as an elite fighting force with a string of costly victories that stretched from...

Now: $114.95
Was:
They were Canada’s Hundred Days: From August 8 to November 11, 1918, Canadian troops cemented their reputation as an elite fighting force with a string of costly victories that stretched from...

Now: $114.95
Was:
Before we were one nation, we were brothers-in-arms. The second coin in our First World War Allies series highlights Newfoundland’s wartime contributions as an independent dominion during the...

Now: $152.95
Was:
The jingle of bells, the patter of hooves: these are the sounds many children yearn to hear each Christmas Eve! This fine silver coin re-kindles a sense of wonder and enchantment in all of us, with a...

Now: $119.95
Was:
Step into a world of serene beauty on the reverse of this fine silver coin, where summer blooms line the path beneath the arbour greenery. The tranquil setting is captivating in the natural light;...

Now: $104.95
Was:
Celebrate a momentous occasion that will be witnessed by millions of Canadians, and many more worldwide. Canada’s official Royal Wedding commemorative coin presents a sparkling congratulatory...

Now: $269.95
Was:
His designs still grace our circulation coins today, but Emanuel Hahn’s numismatic legacy runs deeper than even history remembers. In 1936, the artist submitted several concepts for new...