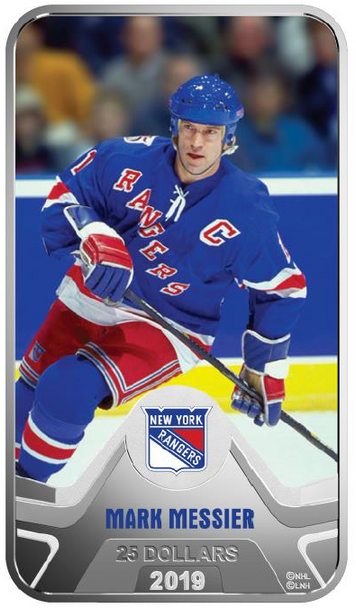 The consummate leader during his time with the New York Rangers (1991-1997, 2000-2004), Mark Messier is one of the NHL stars featured in this rectangular-shaped tribute to legendary Canadian leaders of an Original Six team.

The rectangular reverse features an official licensed photograph from the Hockey Hall of Fame. Reproduced in full colour, the action shot of Mark Messier was taken during his tenure as captain of the New York Rangers (1991-1997, 2001-2004). The image of the Edmonton-born player is set within an engraved frame along with the colour logo of the New York Rangers and the player’s name. The face value, “25 DOLLARS”, is also engraved above the year “2019”. The obverse includes the engraved word “CANADA” and features the effigy of Her Majesty Queen Elizabeth II by Susanna Blunt.

Now: $129.95
Was:
With vibrant colours that oppose their delicate nature, glass holiday ornaments shine and sparkle as brightly as the twinkle in a holiday reveller’s eyes! It’s all part of the magic of the holidays,...

Now: $449.95
Was:
KEY FEATURES: A celebration of Ukrainian-Canadian tradition. This pysanka coin is a representation of the Ukrainian Easter egg monument in Vegreville, Alta., home to one of Canada’s largest...

Now: $125.00
Was: $154.95
The timeless shape of a maple leaf evokes the natural beauty of the Canadian landscape throughout the seasons—particularly in autumn, when maple leaves transform their surroundings with a...

Now: $139.95
Was:
A century of growth and transformation:In 1908, the institution that would become known as the Royal Canadian Mint officially opened for business. Still, coin designs and tools remained the...

Now: $174.95
Was:
DESCRIPTION  Our 2022 HARRY POTTER™ Season’s Greetings 1oz pure silver coin features images of Christmas in The Great Hall in the Hogwarts™ Castle. Engraved around it are the...