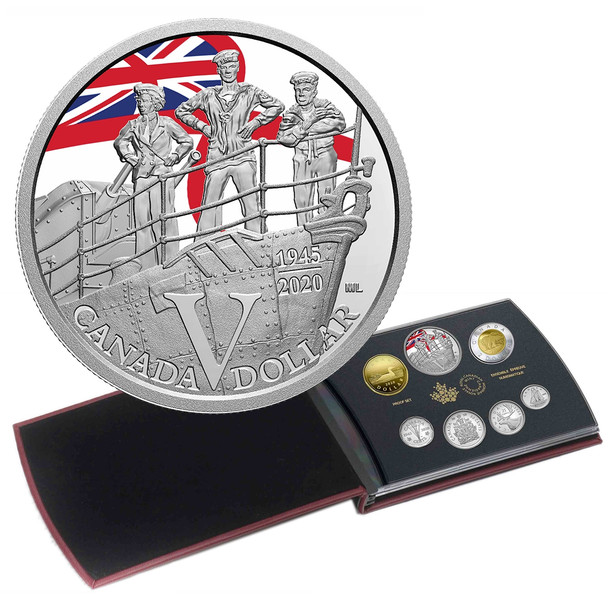 On the 75th anniversary of V-E Day, we salute those who served in the Royal Canadian Navy (RCN) and Women's Royal Canadian Naval Service (WRCNS or "Wrens") during the Second World War. The 2020 Special Edition Silver Dollar is exclusive to this proof set. Its Naval Ensign is a colourful symbol of nearly six years of bravery and sacrifice at sea, where Canada's naval forces contributed significantly to the Allied victory in 1945—from the Atlantic to the Pacific, and waters in between.

2020 $10 FINE SILVER COIN 75TH ANNIVERSARY OF THE LIBERATION OF THE NETHERLANDS: CANADIAN ARMY

Now: $159.95
Was:
PRODUCT SPECIFICATIONS SPECIAL FEATURES Includes a selectively coloured version of the 2019 Proof Dollar, struck in 99.99% pure silver that is only available as part of this set. On the...

Now: $199.95
Was:
PRODUCT SPECIFICATIONS SPECIAL FEATURES 2018 set sold out in the first month! This is only the second time Canada’s iconic circulation coin designs have been included in a colourised...

Now: $229.95
Was:
KEY FEATURES: A celebration of Ukrainian-Canadian tradition. This pysanka coin is a representation of the Ukrainian Easter egg monument in Vegreville, Alta., home to one of Canada’s largest...

Now: $234.95
Was:
They carried the weight of history with them. On June 6, 1944, about 14,000 Canadians stormed Juno Beach during the Allied landings in Normandy. Coming under heavy enemy fire, Canadian forces...

Now: $84.95
Was:
The year 2019 marks the 40th anniversary of the Royal Canadian Mint’s iconic Gold Maple Leaf bullion coin—the standard against which other gold bullion coins are measured. This very...