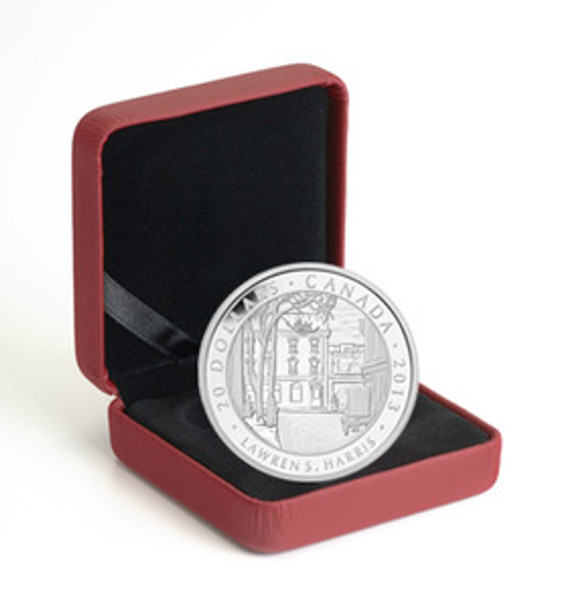 Lawren Stewart Harris was born in Brantford, Ontario, on October 23, 1885. Born into a wealthy family—his family co-owned the important farm equipment company, Massey-Harris—Harris was able to devote his life to art. This freedom allowed him not only to become a leading landscape artist and key founder of the Group of Seven, but a major supporter of other important Canadian artists.

When he was 19 years old, Harris moved to Germany to study art. For Harris, the particularities of Canada's many landscapes became the conduits for the expression of universal truths and his paintings evolved from Impressionist landscapes to geometric abstractions in the 1930s. Regardless of the forms his art adopted, the relationship between the physical and the spiritual remained a key concern over the course of his career. In 1940, after six years in New Hampshire and New Mexico, Harris settled in Vancouver, where he remained until his death in January 1970. Harris was a Companion of the Order of Canada and recipient of several honorary degrees from Canadian universities. He is widely recognized as one of the most important figures in modern Canadian art.

Your coin is the 4th coin in the Group of Seven series. Order yours today!

Special features:
• Your coin beautifully captures Harris's fascination with the interaction of past and present in the central images of Victorian buildings and horse-drawn delivery van.
• 4th coin in the series. Other coins include : Varley, Stormy Weather; Carmichael, Houses, Cobalt; and Lismer, Nova Scotia Fishing Village.
• GST/HST exempt.
• Crafted in 1 ounce of fine silver (99.99% pure).
• Limited to 7,000 coins worldwide. Previous coins in series sold out!

Design:
In your coin's reproduction of Harris' Toronto Street, Winter Morning, several bundled figures walk in the snowy streets by a horse-drawn delivery van. The contrast of light and morning shadows underscores the strong visual tension captured in the dominance of horizontal and vertical lines of street, architecture, and small stand of trees that define the painting.

Packaging:
Your coin is encapsulated and presented in a Royal Canadian Mint branded maroon clamshell case lined with flock and protected by a black sleeve.

Now: $76.00
Was: $114.95
The beauty of a snowflake enchants every heart, in cold climes and warm, and speaks to the wondrous artistry of nature. Description: This fine silver coin is certified to be 99.99% pure silver with...

Now: $199.95
Was:
On Canada Day, Parliament Hill is awash in a sea of red and white that is a proud expression of patriotism—especially in 2017, when Canadians come together to celebrate 150 years of...

Now: $129.95
Was:
This striking enameled silver coin is the first in the Royal Canadian Mint's stunning Stained Glass series. It is a celebration of a unique heritage landmark, and the timeless beauty of Canada's most...

Now: $98.88
Was:
2001 Snake $15 Lunar Silver/Gold Coin This year the 24-karat gold-plated central cameo features the Snake. Philosophical and strategic, the Snake possesses a natural charisma that can hypnotize. It...

Now: $79.95
Was:
1992 Proof SetSet comes in a black box with red satin interior. Commemorating the 175th anniversary of the first stage coach service between Kingston and York in January 1817.Specifications:Finish:...