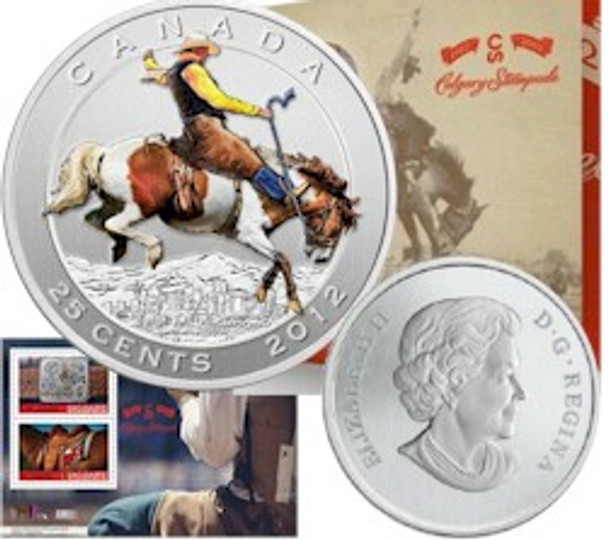 Celebrating 100 Years of the Calgary Stampede

In 1912, a former rope trick performer named Guy Weadick convinced four Alberta cattlemen to help him build a rodeo festival in Calgary that would authentically represent ranching and farming skills and pursuits. One hundred years later, the Stampede is known around the world as 'The Greatest Outdoor Show on Earth.'

Description:
Finely crafted to celebrate the 100th anniversary of the world-famous Calgary Stampede, the reverse of this special coloured cupronickel coin, designed by Canadian artist Tony Bianco, highlights the drama and excitement of the Stampede's saddle bronc riding event.

In the foreground, against the smooth, shining backdrop of the coin's highly polished, silver-tinted surface, a fearless saddle bronc rider and his high-spirited bucking bronco seem to soar above the sparkling city of Calgary among the foothills of the Rockies at the broad Bow River.

The rider's bright yellow shirt and orange bandana glow beneath a black Western vest, the legs of his faded blue denims emerging from beneath worn brown chaps, and light tan cowboy boots sitting high on the muscled neck of the powerful white-and-tan bronco.

The rider's right hand clutches the simple braided rein as his left arm waves high above his white cowboy hat. The bronc's white back legs, bent in tense preparation for its powerful kick, rise just above a finely engraved rendering of the Calgary skyline against the smooth, flowing backdrop of the Rocky Mountains.

The markings 'Canada,' '25 Cents,' and '2012' are embossed within the smooth, polished ring that frames the energetic image. The obverse features the effigy of Her Majesty Queen Elizabeth II by Susanna Blunt.

Special Features:
-This beautiful full-colour rendering of a uniquely Canadian celebration makes this product an ideal gift for Western fans, Stampede aficionados, horse lovers, and collectors
-Whether or not you have the opportunity to attend the Calgary Stampede 100th Anniversary, this beautifully painted 25-cent piece offers you the chance to celebrate by owning a piece of Stampede history.
-Double your collectibles? Included in this set is a souvenir sheet that features a PERMANTENT domestic stamp featuring a horse with classic western riding gear and a U.S.A. stamp showcasing the 2012 Calgary Stampede belt buckle, the much prized trophy awarded to the winners.
-Includes Canada Post Corporation's first augmented reality stamp. Watch the stamp come alive by downloading the Stamps Alive app from canadapost.ca/stampsalive.
-An affordable investment in a beautiful full-colour rendering of a uniquely Canadian celebration.

Packaging:
The 25 cents painted coin is held by a blister and presented in a beautiful illustrated folder detailing the 100th anniversary details and history. It also includes a Canada Post Corporation souvenir sheet that features a PERMANENT domestic stamp and a U.S.A. stamp. The folder is protected by a plastic sleeve.

Now: $29.95
Was:
A perfect gift for BC Lions fans! While supplies last! The BC Lions* have many reasons to celebrate in this 100th Grey Cup® year. Your commemorative stamp relives 1994’s thrilling championship...

Now: $29.95
Was:
A perfect gift for Montréal Alouettes fans! While supplies last! With seven victories in 18 Grey Cup® appearances, the rich history of the Montréal Alouettes* is an integral part of this year ’s...

Now: $39.95
Was:
2014 Coin and Stamp set featuring the Calgary Flames. Description:This painted cupronickel coin has a diameter of 35 millimetres. The reverse design features a coloured team logo in colour captured...

Now: $25.00
Was: $39.95
Each Toronto Maple Leafs MiiJERSEY is a hand-sculpted replica that is designed with a smooth surface and perfect colours matching the team's jerseyand comes packaged in a 360 degree clear...