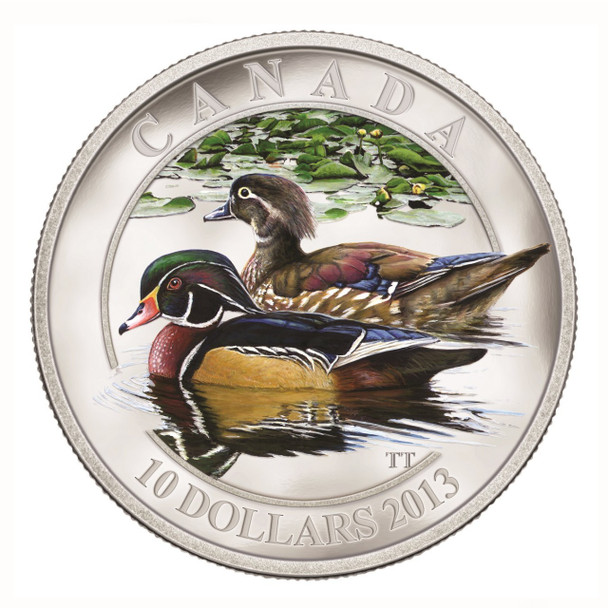 Theme:
Considered by many to be North America’s most beautiful waterfowl, the Wood Duck is a well-loved resident of southern Canada throughout the warm summer months. This unique duck nests in tree cavities, living primarily on vegetation in and near waterways and wetlands.

Description:
The coloured reverse image by Canadian artist Trevor Tennant features a Wood Duck breeding pair swimming in a pond dotted with lily pads. In the foreground swims the colourful male, viewed in profile from his left side. Each detail of his unique colour pattern is majestically captured, from his iridescent crested head with its bright red eye, white outline pattern, and vibrant yellow, orange, and black bill, to his metallic blue wing feathers, russet breast, and golden flank. His image is beautifully reflected in the water in which he swims. In the background, swimming beside her partner, is the lovely female with her predominantly brown and white body, crested head, distinctive white eye markings, blue bill, and indigo and aubergine wing feathers. In the background is a dense stand of striking green lily pads dotted with soft yellow water lilies. The reverse is coloured with specialized inks using an advanced process colour designed to adhere to metal.

Complete Certificate Text:
Beauty on the Wing: The Wood Duck
The Wood Duck’s Latin name, Aix sponsa, means “bird in wedding raiment” –and this striking duck is well suited to its flattering Latin nomenclature. Some experts consider it the most beautiful waterfowl in North America.

The male in his breeding colours has striking red eyes and a graceful red, yellow, and white bill tipped with black. The feathers of his iridescent green crested head change colour as they shift in the light, ranging from bright grass-green to intense violet. Layered over this lovely colouring is a unique white outline marking. His warm chestnut-brown breast is spotted in white and meets his bright white belly feathers in a graceful semicircular pattern. The upper side of his wing and back feathers are iridescent, with metallic-looking colouring that is unique among North American ducks. His flanks are golden yellow. The female, though more muted than the male, is still striking in contrast to other ducks and far showier than females of most duck species.

This midsized duck—averaging just around 650 grams—is smaller than a Mallard but larger than a Blue-Winged Teal. The Wood Duck is an exclusively North American duck. Its colouring and its nesting traits group it with perching ducks. This largely vegetarian waterfowl lives primarily on water-based plants along with other vegetation and tree nuts, but consumes large quantities of protein through invertebrates when young to promote fast growth.

The Wood Duck is one of only a few duck species in North America that nest in tree cavities. These holes, left by natural decay, lightning strikes, and woodpeckers can be as small as 10 centimetres at their opening. The cavity will be situated anywhere in the trunk, from one metre off the ground to the top few metres of a 20-metre tree. Most Wood Duck nests are located near wetlands like swamps, marshes, and ponds as well as waterways like creeks and rivers.

The Wood Duck is found along the southern border of every Canadian province, mostly from April to early October. Those situated in warmer areas are known to produce two broods per season—the Wood Duck is the only duck in North America to do so. Most Wood Ducks at breeding sites in eastern Canada begin their migration at the time that more severe nighttime frosts begin, in early October. Those in warmer locales, like central British Columbia, often migrate to the coast.

Now: $89.95
Was:
Theme:Celebrating 75 Years of Ducks Unlimited Canada: The Mallard—Icon of Canadian WetlandsDescription: This silver 10-dollar coin measures 34 millimetres and weighs 15.87 grams. The reverse image by...

Now: $39.95
Was:
Theme: Considered by many to be North America’s most beautiful waterfowl, the Wood Duck is a well-loved resident of southern Canada throughout the warm summer months. This unique duck nests in tree...

Now: $89.95
Was:
The unique coast-dwelling Harlequin duck is a rare and lovely sight along Canada’s Pacific and Atlantic shores in winter, and among fast-moving inland streams in summer. This fourth coin in the Royal...

Now: $9.95
Was:
2012 was the last year of the Canadian Penny Very few were produced Rarly found in circulation COMPLETED SEALED ROLL OF 2012 NON-MAGNETIC PENNIES

Now: $2.00
Was:
One of each of the new 100th Anniversary of the Bluenose dimes! Uncirculated

Now: $39.95
Was:
To commemorate the centennial anniversary of Canada’s iconic schooner, the Royal Canadian Mint has issued three different Bluenose commemorative dimes in 2021, and all three versions are...