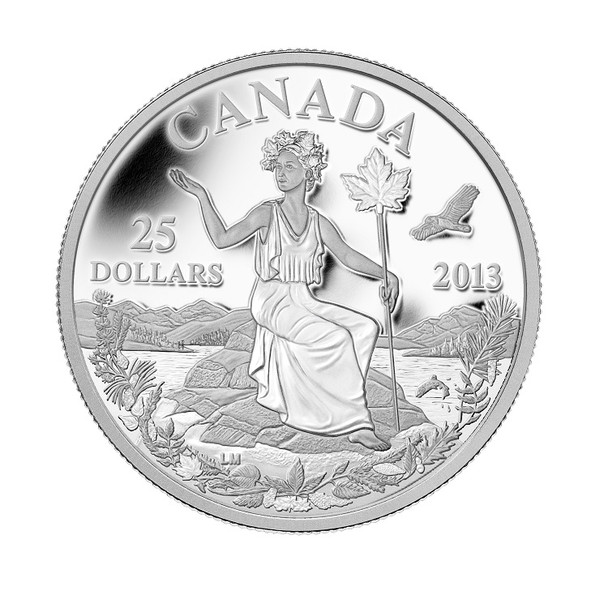 Theme:
Female allegories have long been featured on coinage around the world. This exciting new coin celebrates the historic Miss Canada icon popularized in Canadian culture from Confederation to the end of the Second World War.

Description:
The reverse image by Canadian artist Laurie McGaw features an iconic rendering of a new Canada allegory for modern-day Canada. Seated on the “throne” of the Canadian Shield, this classically dressed, seated female figure occupies the centre of the reverse field. Viewed with her head turned to the left side of the reverse, her body turned toward the right, she sports a crown of maple leaves—an iconic image associated with Canada for more than two centuries. From her dynamic position, she raises her right hand with open palm in a gesture of welcome. In her left arm she holds a staff bearing a large maple leaf. Her bare right foot is visible beneath the hem of her long gown, connecting the figure directly to the natural world within which she is positioned. In the landscape surrounding her we see the robust natural variety of Canada. In the distant background rise vast mountains and a pure glacial river. The mid-ground is occupied by a large waterway bounded by a wild forested shoreline. In the air above the figure and to her right flies an eagle, an important element of First Nations spiritualism. In the water below the eagle, a jumping fish represents the vigour and power of Canada’s natural world. The base of the image is decorated with a garland composed of more than 25 species of Canadian leaves, referencing Canada’s multicultural makeup.

Packaging:
Each coin is encapsulated and presented in a maroon clamshell case lined with flock and protected by a black RCM branded sleeve.
Finished size: 67 mm x 67 mm

Complete certificate text:
Lady of the North Land: Celebrating a Canadian Allegory
France has Marianne, England celebrates Britannia, America holds dear its Lady Liberty. For centuries, nations have adopted female personification to allegorically represent an idealized national image linked to classical iconography. In the years following Confederation, through the First World War and in various forms until the middle of the 20th century, Canada too had a well-known feminine national allegory, Miss Canada, whose emergence and evolution in Canada’s formative era reflects the fascinating and often complex story of Canadian nationalism.

In her earliest years, this Canadian allegorical figure was portrayed as the daughter of England’s feminine allegory, Britannia. In the classical robes of ancient Greece and Rome, Miss Canada was youthful and obedient to her august elder. The image was used in many ways, from political cartoons to product advertising. But as Canada’s international relationships changed over time—particularly its links with both England and the United States—so did the treatment and use of the Miss Canada allegory. By the outset of the First World War, she was so well known as to form part of the mythological vernacular of the country, having also appeared in literature by this time.

The First World War was a time of massive upheaval around the world but also within Canada itself. As the young country struggled to define its values, it engaged in a fluid and often disorienting dance between past and present. Although Canada was still a Dominion of the British Empire, nationalism was gaining momentum. At the same time, the tension between Canada’s original European settlement groups—the French and the English—was ongoing, fueled by contemporary events and public policy. Women were fighting for the vote. Discovery and “progress” on multiple fronts were changing the way people lived and worked. In short, “Canada,” still largely amorphous, struggled to define itself at a time when its western cultural context was itself undergoing massive change.

Now: $92.00
Was: $114.95
Theme: 2013 Maple Leaf Impression with enamelValour, perseverance, diversity: the maple leaf is a powerful symbol of Canadian identity and values. Internationally recognized, the maple leaf has been...

Now: $229.95
Was:
DESCRIPTION  Known for its imposing stature and inherent strength, the plains bison (Bison bison bison) has long captured our imaginations and inspired awe. Not one but two male bison...