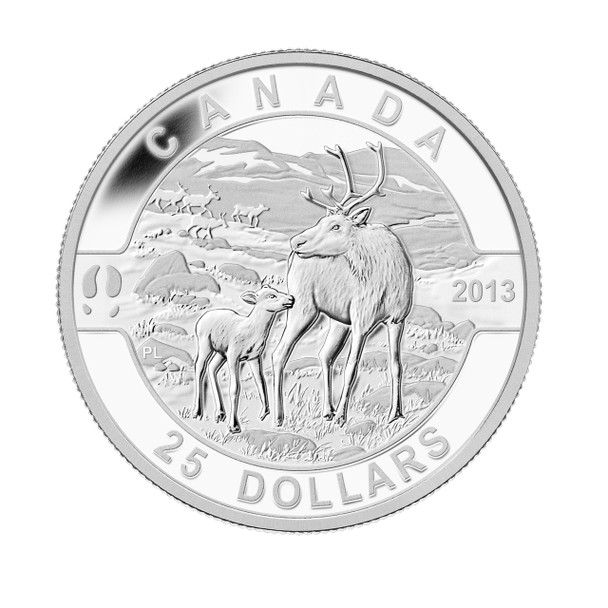 Theme:
The fourth coin in the Royal Canadian Mint’s exciting new O Canada series focusing on iconic Canadian images, this beautiful coin celebrates the great caribou—one of Canada’s most fascinating native species.
Description:
The reverse design presents a caribou cow and calf standing in the rugged terrain of the Canadian North. The mother stands on the right, her head turned toward her calf, her left eye peering at the viewer. Her tall antlers reach skyward atop her large head and strong neck. Beside her, the knobby-kneed calf peers shyly at its mother, waiting for her signal. The two stand in a grass-filled early summer valley. Behind them, their herd travels toward a river in the far distance. Rocky mountain peaks rise to meet the far-off horizon. The reverse also features a stylized caribou hoof print.

Ancient Spirit of the North: The Mighty Caribou

Despite the relatively large size of Canada’s caribou population, some subspecies, such as the Woodland Caribou, are experiencing ongoing range decreases that threaten their survival. Considered by many conservationists to be an important umbrella species whose presence may be intrinsic to the subsistence of numerous other species. Canada’s caribou are the subject of concern in the face of climate change and habitat disruption.

This midsized ruminant lives primarily on nutrient-rich lichens in the winter, adding leaves and grasses to its diet as they become available in the warmer months. All caribou shovel their way to lichens through winter snows using specially adapted hooves. The hooves, whose rigidity changes with the seasons to give the animal greater grip on ice, rock, or boggy land, also grow much longer in winter to give the caribou greater traction on snow. The two dewclaws at the back of each hoof help to improve the caribou’s weight distribution and balance in any terrain. To escape their main predator, the grey wolf, caribou can run at speeds of up to 80 kilometres per hour, and are fast, strong swimmers.

Each caribou subspecies bears important adaptations in size, musculature, and other physical traits that make it exceptionally well suited to its habitat. The smaller subspecies of the tundra are stouter, their shortened, fur-covered features protected from harsh Arctic winds. Fur colour also varies widely among caribou, depending on subspecies, season, and geographical location. Generally, the caribou’s colouring ranges from off-white to dark brown.

All caribou have noses with special adaptations that increase the surface area of the nostrils so that they can heat the frozen Arctic air as they inhale, before it reaches their lungs. Recent research suggests that caribou may be able to see ultraviolet light—if so, they are the only mammal that can. The adaptation is believed to result from the need to visually distinguish objects in an environment which offers little visual contrast in the normal light range.

Caribou are unique among Cervidae in that both sexes grow antlers. Though the males’ antlers are typically larger, giving them dominance through the summer months and autumn mating season, pregnant females retain their antlers long after the males have shed theirs in late autumn, thereby becoming dominant over the herd through the long winter months until they return to their calving grounds and give birth in May and June.

Caribou are exceptional travellers, covering more ground in their migrations than any other land animal. Some of Canada’s caribou populations travel 5,000 kilometres each year. They migrate together in enormous herds; in spring, these groups can number 500,000 and are an amazing sight to behold.

A Canadian Icon
For Canadians, the caribou embodies the tale of this nation’s ageless landscape. In the caribou, we behold a vast migratory journey through space and time. We relate to its resilience, its ability, across the massive span of millennia and kilometres, to nourish itself and thrive in harsh, remote conditions. It teaches us the lessons of survival in this land: the benefits of slow, steady progress borne of tireless effort; the safety of the herd against predators large and small; and our intrinsic interconnection with the world we inhabit. It is no surprise that this unique animal is a Canadian icon, celebrated since 1937 on Canada’s 25-cent circulation coin, official animal of Newfoundland and Labrador, and shield-bearer of the Nunavut coat of arms.

Now: $54.00
Was: $64.95
The Canadian winter is a time of celebration and outdoor fun. This beautiful full-colour coin features an original artwork by Canadian artist Tony Harris and captures the joy of a Canadian rite of...