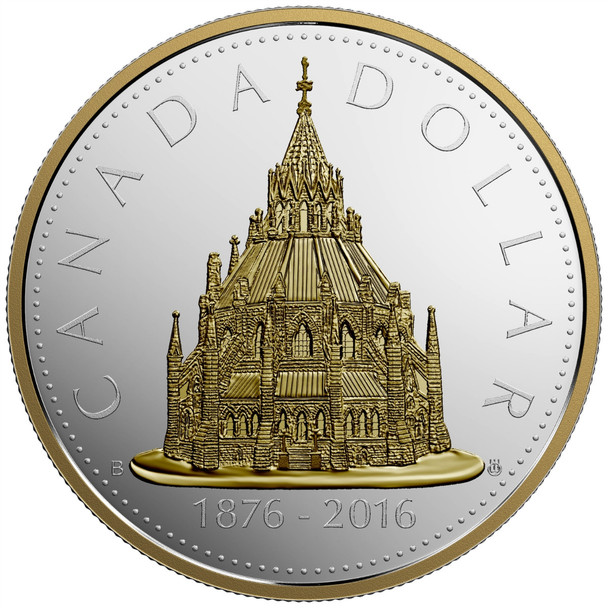 This selectively gold-plated 99.99% pure silver dollar is the second in the Royal Canadian Mint's series celebrating historic proof dollar designs. This release features the design from Canada's 1976 silver proof dollar commemorating the Library of Parliament's centennial. This 99.99% pure silver 1-dollar coin has a diameter of 50 millimetres and a nominal metal weight of 2 ounces. Its reverse features Walter Ott's image of the Library of Parliament from the 1976 silver proof dollar. The design presents the outside of the Library of Parliament in fine architectural detail, highlighting the building's buttresses, ornate windows, three-tiered domed roof, and other gothic details. The building and the coin's outer edge are plated in 99.99% pure gold. The reverse is engraved with the words "CANADA" and "DOLLAR" and the dates "1876-2016." The obverse features the effigy of Her Majesty Queen Elizabeth II by Arnold Machin from the original 1976 commemorative silver dollar. The Queen's crown and mantle are plated in 99.99% pure gold.

Now: $599.95
Was:
Celebrate the history and artistry of Canadian circulation coinage with this fine silver “loonie”—part of the Royal Canadian Mint’s new series featuring Canada’s six circulation coins. Each beautiful...

Now: $269.95
Was:
The fourth coin in our exclusive Masters Club series of historic proof dollar designs! This striking design, originally released in 1994, presents the National War Memorial to honour the sacrifice of...

Now: $199.95
Was:
DESCRIPTION  Canada’s “pulsating” Peace Dollar is back for 2023. Each Peace Dollar is a powerful representation of Canada’s ongoing dedication to universal human rights and world peace. Before...

Now: $139.95
Was:
The unmistakable black-and-white orca (Orcinus orca) is an awe-inspiring emblem of Canada’s Pacific Coast, and is known for the strong family bonds that are at the heart of the tight-knit...

Now: $99.95
Was:
Theme: This coin is the second in the Royal Canadian Mint’s innovative new series showcasing Canada’s magnificent maple trees from an entirely new and unique perspective, adding creative...

Now: $69.95
Was:
One of the loveliest signs of spring, the lilac blooms as the weather warms! Its showy blooms add a sweet perfume to the gentlest breeze while peppering the landscape with lush sprigs of purple, pink...

Now: $102.95
Was:
There’s an enchanting, almost mystical glow to Canada’s forests on a sunny autumn day, when the colourful foliage beckons to be admired up-close. With this beautifully coloured fine...