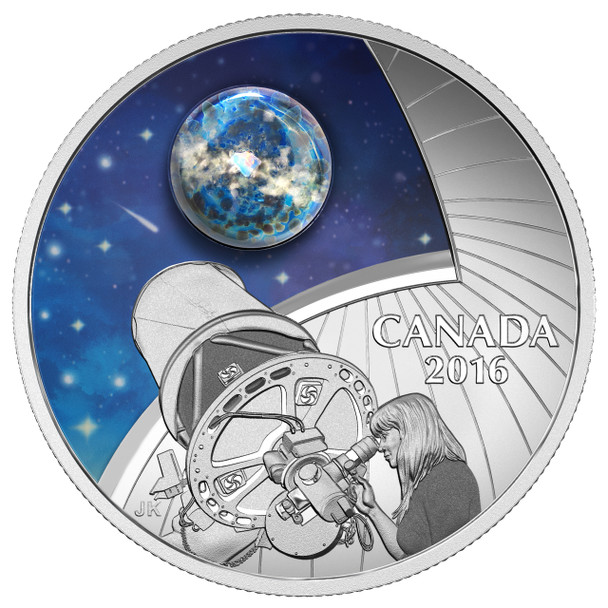 Canadian amateur astronomers using the Burke-Gaffney Observatory made a remarkable discovery in 1995 when they identified a supernova in a galaxy about 70 million light years away—the first such discovery made from within Canada. Such a powerful and colourful explosion is a rare celestial event, as the dying star expires in a burst of bright light and expelled energy; it is a truly breathtaking sight to behold, one of great ethereal beauty in a universe that still holds so many secrets!

DESIGN
The engraved reverse by Canadian artist Joel Kimmel re-creates the dome of the Burke-Gaffney Observatory located at Saint Mary’s University in Halifax, Nova Scotia, where a student looks through the observatory’s telescope. Against the softly coloured glow of a clear, star-filled night sky, a unique glass insert captures the otherworldly beauty of a supernova crafted by borosilicate artist Loïc Beaumont-Tremblay. The crystal-clear globule of boro glass contains an opal that represents the dying star, which is meticulously positioned over a darkly coloured background and surrounded by wisps of swirled glass and glow-in-the-dark colours. There is a remarkably luminous quality to the insert that conveys this stellar explosion of light and energy, which could easily outshine the glow of its own galaxy—even if only temporarily.

$151.95
Now: $108.00
Was: $151.95
Some of the natural world’s most incredible wonders are also its tiniest! Creepy-crawly or cute, many little creatures can be found in our own backyards and gardens—or on this superb fine...

Now: $104.95
Was:
The maple leaf has long been an internationally recognized emblem of Canada-an iconic symbol that has come to represent the history and identity of its people and the land itself.In the background,...

Now: $102.95
Was:
There’s an enchanting, almost mystical glow to Canada’s forests on a sunny autumn day, when the colourful foliage beckons to be admired up-close. With this beautifully coloured fine...

Now: $149.95
Was:
In the continuing quest to understand our universe, astronomers and astrophysicists with the National Research Council of Canada (NRC) use the laws of physics and chemistry to explore the processes...

Now: $149.95
Was:
In the continuing quest to understand our universe, astronomers and astrophysicists with the National Research Council of Canada (NRC) use the laws of physics and chemistry to explore the processes...

Now: $159.95
Was:
Whether an animal lives on land, dances among the waves, or soars high in the sky, it is dependent upon Mother Earth and the precious water she provides. For a nation like Canada, with endless...

Now: $99.95
Was:
Few animals are as emblematic of Canada’s rugged, unspoiled wilderness as the grizzly bear (Ursus arctos). Playing a complex role in the biodiversity of western and northern Canada, this...

Now: $99.95
Was:
Found in the waters of the Pacific, Arctic and Atlantic oceans, and a wealth of rivers and lakes in between, Canada’s salmonid species are a powerful symbol of the wild and a valued part of our...

Now: $99.95
Was:
Since 1916, the Migratory Birds Convention represents an enduring partnership between Canada and the United States to safeguard our beloved migratory bird populations. This four-coin series...

$99.95
Now: $82.00
Was: $99.95
Towering over the western Canadian landscape, the Rocky Mountains have long been used as symbols of Canada’s rugged, unspoiled wilderness. Countless outdoor enthusiasts and artists are drawn to...