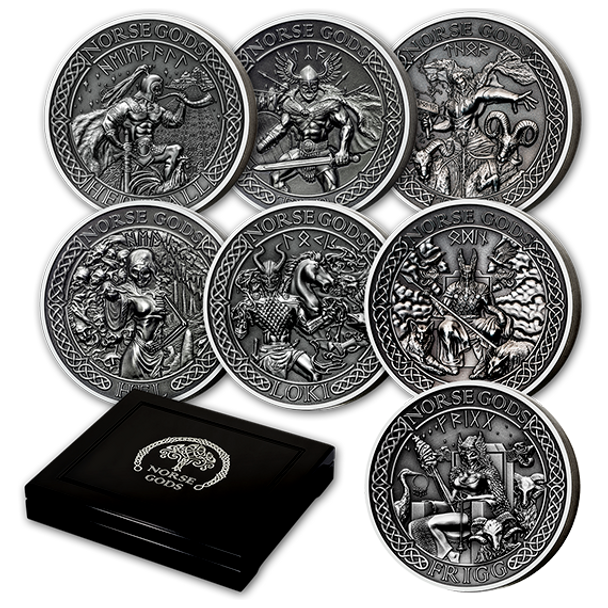 This nine-coin series featuring the most famous figures of Norse mythology has been brought to life in a magnificent Antique finish with a high-relief strike.

Each 2 oz. silver coin is struck from 99.9% pure silver and issued as Cook Islands legal tender. The Royal Canadian Mint has secured 450 complete sets, and we recommend you reserve this low mintage subscription soon.

Odin:
All-knowing "All Father" of the gods and King of Asgard.  He was said to be known as the Lord of War, Death and Knowledge.

Thor:
Son of Odin, Thor was represented as the god of thunder, the sky, fertility and the law.  He was known to be armed in battle with his famous hammer Mjölnir.

Tyr:
Worshipped god of war, justice and order, he had only one hand, as the other had been bitten off by the wolf-like creature Fenrir.

Hel:
The goddess of the dead and the afterlife, she was said to be portrayed as half dead, half alive herself.

Heimdall:
The watchman of the gods who guarded the gateway to Asgard. He was represented as the sentinel god of light, security and surveillance.

Loki:
This god was a mischievous trickster who caused trouble, but was said to be a companion to both Thor and Odin.

Sif:
Wife of Thor, was admired and known for her beautiful golden hair.

Freyr:
This god of fertility was known to use the fertilizing powers of the sun and rain for bountiful harvests, wealth and peace.

Frigg:
Wife of Odin and Queen of Asgard, she was represented as the top Norse goddess of marriage and motherhood.

Now: $75.00
Was: $89.95
INCLUDES A SERIALIZED BOOKLET THAT IS FULL OF FASCINATING IMAGES AND FACTS ABOUT THE SABLE ISLAND HORSES.Off the coast of Nova Scotia, about 300km (186 mi) southeast of Halifax lies Sable Island, a...

Now: $74.95
Was:
There’s a great tradition of storytelling across Canada, where many of us share a fascination with tales of unexplained apparitions, supernatural beings and haunted places—even if some might send...

Now: $55.00
Was: $74.95
There’s a great tradition of storytelling across Canada, where many of us share a fascination with tales of unexplained apparitions, supernatural beings and haunted places—even if some might send...

Now: $189.95
Was:
KEY FEATURES Different textures and finishes. Set against an engraved rock texture that represents the fossil site, the dinosaur skull features a matte proof finish that gives it a slightly aged...

2021 $50 FINE SILVER COIN LOST THEN FOUND: CHAMPLAIN AND THE ASTROLABE

Now: $1.50
Was:
Pages for holding coin and currency

Now: $1.50
Was:
Pages for holding coin and currency

Now: $1.50
Was:
These 20-Pocket Pages are designed to hold the cardboard 2x2 holders