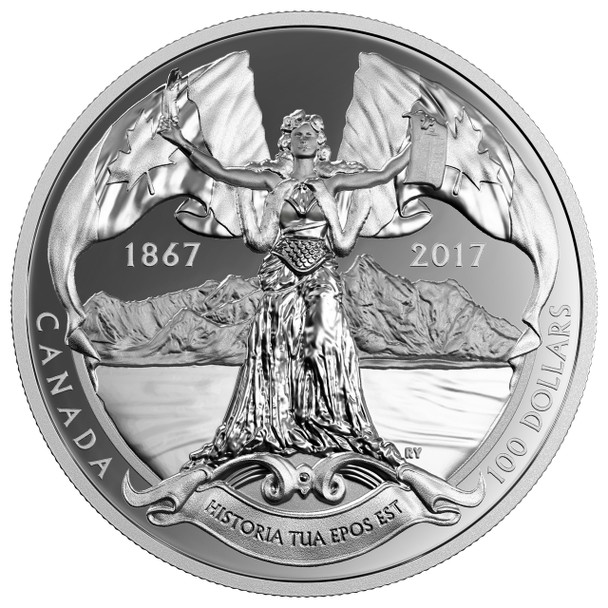 This low mintage coin is the third in a series of three important historical pieces commemorating Canadian Confederation. Each medal features a historical landmark along the path of Canadian history: Canadian Confederation of 1867, the 1927 Diamond Jubilee of Canadian Confederation, and the 150th Anniversary of Canadian Confederation in 2017.
In the French version of O Canada, the poignant line “Ton histoire est une épopée” (Your history is an epic) alludes to the great lessons and legacy of our past, which has helped define Canada as a strong, steadfast and innovative nation. It’s a picture of Canada that is beautifully personified on the reverse of this fine silver coin, where the allegorical figure proudly carries 150 years of history while welcoming whatever challenges the future may bring. This is our story as a nation. This is Canada.

The reverse design by Canadian artist Rebecca Yanovskaya introduces a contemporary take on a classic female allegory that personifies Canada on its 150th anniversary.
Within this complex and richly symbolic design, every element represents a different political, historic, geographic and social aspect of Canada’s story as a nation.
In the foreground, Canada rises up strong, majestic and bold, with a youthful appearance that reflects Canada’s status as a relatively young nation. Clad in protective armour, she is the picture of grace and a vision of strength as her arms are open wide, ready to embrace what lies ahead.
Fittingly, she stands on a plinth bearing the words HISTORIA TUA EPOS EST—a Latin translation of the line “Ton histoire est une épopée” (Your history/story is an epic) from the French version of O Canada. One hand holds a symbolic representation of the British North America Act, 1867, which marked the birth of the Dominion of Canada 150 years ago; in the other hand, a single feather pays tribute to those who helped forge our nation’s path: the First Nations peoples and the Fathers of Confederation.
A wreath of poppies adorns her head, while a fur-trimmed cape is a reminder of First Nations traditions, and the importance of the fur trade in Canada’s early history. Perhaps tellingly, Canada carries no weapon—a nod to Canada’s peacekeeping traditions, and our contributions to peace throughout the world.
In the background, the Canadian flags are positioned in a way that resembles unfurled wings; this creates an impression that Canada is a nautical figurehead, steering the course through the often-turbulent waters of history. Behind her is Mount Logan, our tallest peak; it reflects the diversity of the land but also alludes to the ability of Canadians to “rise” to the challenges we face.
The obverse features the effigies of Her Majesty Queen Elizabeth II by Susanna Blunt and Her Majesty Queen Victoria by Leonard Charles Wyon. The obverse also includes the Royal cypher used by Her Majesty Queen Elizabeth II, and a cypher used by Queen Victoria. Each Royal cypher is ensigned with a crown depicted in a style specifically used by each monarch.

Now: $44.95
Was:
O Canada! From colourful flora to iconic fauna and landmarks, breathtaking images of Canada’s landscapes reflect the incredible beauty and diversity of the Canadian experience. Beginning with the...

Now: $44.95
Was:
O Canada! From colourful flora to iconic fauna and landmarks, breathtaking images of Canada’s landscapes reflect the diversity of the Canadian experience. The second coin in this 13-coin series...

Now: $51.95
Was:
From colourful flora to iconic fauna and landmarks, the breathtaking photographs of Canadian Geographic reflect the rich diversity of the Canadian experience. The eighth coin in the continuing...

Now: $799.95
Was:
Bugs. Daffy. Tweety. Sylvester. For many Canadians, the mere mention of these names evoke fond childhood memories of spending Saturday mornings in front of a television, transfixed and spellbound as...

$151.95
Now: $139.00
Was: $151.95
The sea has its secrets, for beneath the ocean waves lies a hidden realm filled with enchantment and wonders of all shapes and sizes! This colourful underwater paradise is home to awe-inspiring...

Now: $899.95
Was:
This low mintage coin is the second in a series of three important historical pieces commemorating Canadian Confederation. Each medal features a historical landmark along the path of Canadian...

Now: $479.95
Was:
DESCRIPTION When the 60th anniversary of the reign of Queen Elizabeth II was celebrated throughout the British Commonwealth, Canada, the United Kingdom and Australia all produced superb proof...