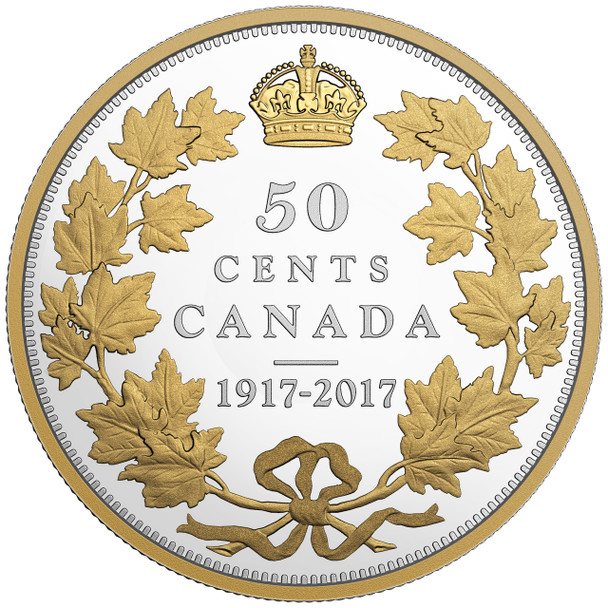 From that most Canadian emblem, the maple leaf, to the national arms, the changing appearance of Canada’s 50-cent circulation coin mirrors the evolution of a nation that is now celebrating its 150th anniversary. This exclusive coin offers a unique 100-year retrospective of Canada’s 50-cent circulation coin from 1917, featuring a design beautifully enhanced with selective gold plating.

DESIGN
The reverse presents a meticulously engraved recreation of the crossed maple boughs original designed by L. C. Wyon and later modified by W. H. J. Blakemore, which appeared on Canada’s 50-cent coins before 1937. The boughs of 22 leaves and St. Edward’s Crown (the solid gold coronation crown) are all beautifully enhanced by the selective application of gold plating, which adds a sumptuous golden hue that stands out against the mirror background. Complete with its reeded edge, the reverse also recreates the engraved face value “50 CENTS” and the word “CANADA”, and features the commemorative dates “1917-2017” to honour the centennial of the 1917 issue. The selective gold plating continues on the obverse, which features the effigy of King George V by Sir E. B. MacKennal.

Now: $89.95
Was:
The year 2015 marks the 100th anniversary of the poem In Flanders Fields, which was written by Canadian physician Lieutenant Colonel John McCrae amid the horrors of the Second Battle of Ypres in May...

Now: $239.95
Was:
Canada’s 50-cent remains a constant, if elusive, collector favourite — one whose heraldic design imbues it with a deep sense of tradition and speaks to the history of a proud nation. This...