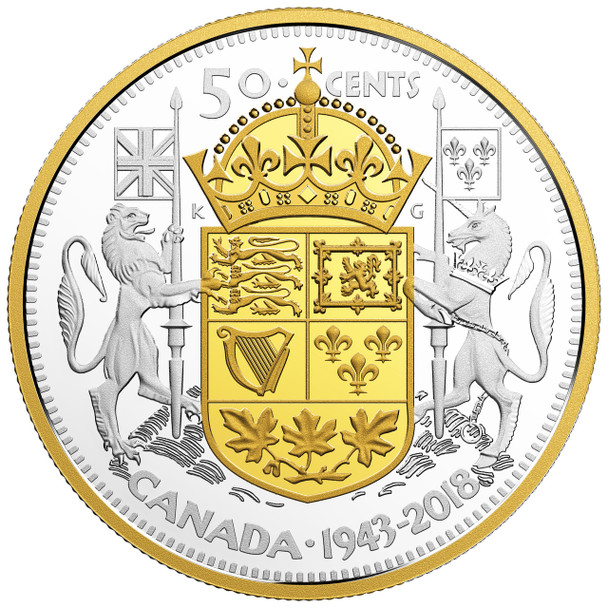 Canada’s 50-cent remains a constant, if elusive, collector favourite — one whose heraldic design imbues it with a deep sense of tradition and speaks to the history of a proud nation. This exclusive coin looks back at the half-dollar issued in 1943, which is re-created here in pure silver with a celebratory touch of gold plating.

 A MASTERS CLUB EXCLUSIVE! A collectible retrospective on the story of Canada’s half-dollar! This 75th anniversary piece re-creates the 1943 issue of Canada’s 50-cent coin—and it is only available to our Masters Club members!
 2 OUNCES OF FINE SILVER: Nearly double the diameter of the original issue, this commemorative half-dollar is meticulously crafted in an impressive 2 ounces of 99.99% pure silver!
 SELECTIVE GOLD PLATING: Selective gold plating adds a touch of elegance to the Arms of Canada on the reverse, the effigy on the obverse, and the rim that frames the mirror-like proof finish!
 DOUBLE DATED: Includes the engraved commemoratives dates “1943-2018” in the same font used on the original issue!
 HISTORY ON TWO SIDES: The obverse features the effigy of King George VI by T.H. Paget—just like the 1943 half-dollar, including the “IND: IMP” inscription in the legend.

The reverse features a re-creation of the stylized Arms of Canada designed by G. E. Kruger-Gray, as it appeared on Canada’s 50-cent coin in 1943. At the centre is the Shield, with the royal symbols of Great Britain and France in the upper quadrants: three lions (England), one lion within a “double
tressure” (Scotland), the harp of Tara (Ireland), and three fleur-de-lis (France). In the bottom portion of the Shield, a sprig of three maple leaves represents Canadians of all origins. Two Supporters hold the Shield: on the viewer’s left, a lion holds a lance with the Union Jack; on the right, a unicorn holds
the royal flag of France. Above the Shield is an enlarged version of the Royal Crown, which reflects the monarchy of Canada. Both the rim and the arms are gold-plated, which strikes an elegant contrast between the gleam of gold and the silver shine of the mirror-like background. Along with
the reeded edge, the reverse includes the engraved face value “50 CENTS” and the word “CANADA”, while the dates “1943-2018” are inscribed in a matching font to commemorate the 75th anniversary of the 1943 issue. The selective gold plating continues on the obverse, which features the effigy of
George VI by Sir T.H. Paget.

Now: $339.95
Was:
From that most Canadian emblem, the maple leaf, to the national arms, the changing appearance of Canada’s 50-cent circulation coin mirrors the evolution of a nation that is now celebrating its 150th...

Now: $199.95
Was:
DESCRIPTION  Canada’s “pulsating” Peace Dollar is back for 2023. Each Peace Dollar is a powerful representation of Canada’s ongoing dedication to universal human rights and world peace. Before...

Now: $24.95
Was:
DESCRIPTION  The year 2012 marks the 50th Anniversary of the Canadian Coast Guard (CCG). . This coin makes a beautiful gift for your friends and family interested in maritime history. The...