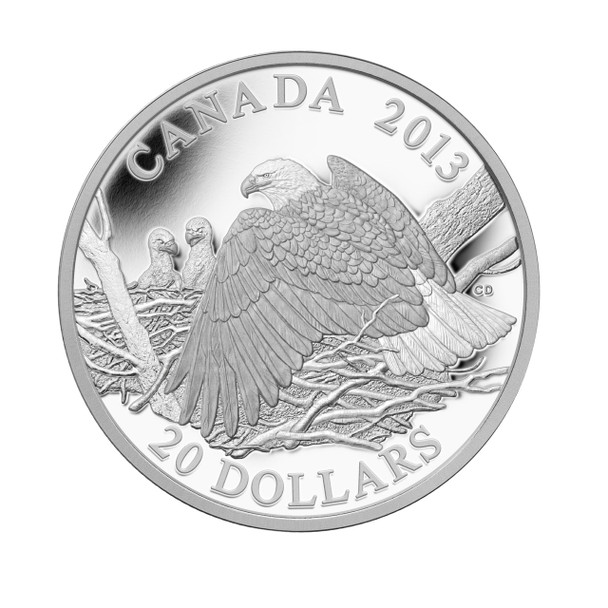 Theme:
The fourth and final coin in the Royal Canadian Mint’s exciting four-coin series featuring the power and beauty of the bald eagle—an iconic Canadian species.

Description:
Enjoy a close-up view of this rare natural scene. The reverse image features a female bald eagle protecting her two young eaglets in their treetop nest. The female eagle dominates the centre of the image. Viewed from behind, her left eye turned warily to the viewer, she raises her long left wing in a protective stance. Her snowy tail feathers, dark body and distinctive head are engraved in stunning detail. The mother sits at the edge of her large nest, which is nestled among the boughs of a high treetop. The intricate weaving of twigs and branches is rendered in painstaking detail and accentuated with a combination of polishes. The head and tail of the mother as well as the delicate feathers of the baby birds, have been given a soft matte finish that stands proud against the brilliant polished background. Every detail has been considered and selectively treated to deliver the best possible finish. This coin also features unique edge lettering, with the words “FINE SILVER 1 OZ ARGENT PUR 1 OZ” engraved around the edge of the coin.

Fierce Protectress
The amazing bald eagle—Haliaeetus leucocephalus—is Canada’s largest bird of prey and the only eagle exclusive to North America. An apex predator with no natural enemies, the bald eagle has long been a potent symbol of vision, power and stoicism. The adult boasts a wing span of more than 2 metres, a standing height of about 1 metre, and an average weight of up to 7 kilograms. Females are generally larger than males. The renowned raptor is noted for its distinctive dark-feathered body and white-feathered head and tail, large golden eyes, bright yellow beak and massive yellow claws armed with sharp, powerful talons. This long-lived bird can survive nearly 30 years in the wild and even longer in captivity. Nesting in tall trees normally near large bodies of water, bald eagles survive on a diet of fish, birds, invertebrates and small mammals, but are opportunistic feeders who will also steal from other predators and eat carrion.

The bald eagle does not reach reproductive maturity until about its fifth year of life, at which time the eagle seeks a mate that will likely become its life partner. Together, this pair will build a massive nest, usually in a tall sturdy conifer near the ocean or another large body of water, but sometimes on a cliff face or other isolated natural feature.

Eagles do not necessarily reproduce each year, but when they do, the female lays between one and three large eggs. The incubation period lasts about 35 days, with the female generally taking on the role of lead incubator but occasionally trading places with the male to hunt and feed herself. The small grey downy eaglets will not have any feathers for more than a month. For this first month, one of the adults—usually the female—is always with the eaglets to protect them, shelter them and keep them warm. The male will hunt and bring back food for

this period. Both parents take great care around their young, curling their talons under and moving carefully in the nest.

At two and a half to three months of age, the eaglets have grown considerably and now have the feathers necessary for flight. They experiment with trial flights and begin learning from their parents how to hunt, fly and feed themselves. They will moult over the next four years but will not acquire their distinctive adult colouring until they reach maturity. Once they have fledged, the juveniles stay with or near their parents for about two months. In Canada, the time from birth to leaving the nest lasts from spring to late summer. Parents may continue to help feed their offspring throughout the first fall and winter since the young eagles’ hunting skills are immature at this time. Alternatively, the young eagles may join others in communal wintering grounds, practicing together the skills necessary for survival.

In Canada, large bald eagle populations are concentrated along the Pacific Coast; however, stable smaller populations are also found across the prairie provinces, in Northern Ontario, on Cape Breton Island.

$104.95
Now: $65.00
Was: $104.95
The third and final coin in the Royal Canadian Mint’s Butterflies of Canada series celebrates the bright yellow Colias gigantea with an exquisitely engraved and selectively coloured silver coin...

Now: $75.00
Was: $99.95
This coin is part of a series that celebrates the bison – the largest land animal in North America, a symbol of strength, and an important part of the history of the Prairies region of Canada...

Now: $49.95
Was:
The second coin in the Royal Canadian Mint's exciting new O Canada series focusing on iconic Canadian images, this beautiful coin celebrates the rich history and symbolism associated with the...

Now: $119.95
Was:
For 25 years, the iconic Silver Maple Leaf has been a highly sought-after Royal Canadian Mint bullion coin. This pure silver numismatic coin is a tribute to the Silver Maple Leaf’s beauty and...

Now: $119.95
Was:
These coins celebrate one of Canada's national animals, the hard-working beaver.This 20-Dollar coin is certified to be 99.99% pure silver with a diameter of 38 millimetres and a metal weight of 1...