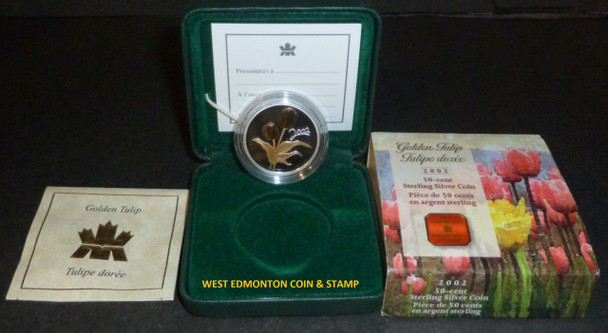 Gratitude and affection in full bloom-
during the second world war, the invasion of Holland forced its royal family into exile and Canada provided a welcome refuge where the honoured guests remained until the Netherlands were liberated in the fall of 1945.

To express her gratitude, Princess Juliana (later Queen) sent 20000 tulip bulbs to the nation's capital. every year, more Dutch bulbs arrived and the breathtaking blanket of colour that began to cover the city quickly established Ottawa as "the Tulip Capital of North America."

2002 50-cent coin is proof quality and is authorized by the Government of Canada. This coin was expertly struck by the Royal Canadian Mint and has a limited mintage of 20000 coins worldwide.

Now: $24.95
Was:
Created in 1970 to mark Manitoba's centennial, Folklorama brings together cultures from all over the world. More than 40 pavilions are the central attractions of the festival. Now you can get...

$99.95
Now: $64.00
Was: $99.95
One look at the Golden Daffodil and you won't be able to resist its captivating beauty. Minted with the same artistic flair and technical precision that made last year's Golden Tulip coin such a...

Now: $75.00
Was: $99.95
One of the most important qualities any plant can possess is versatility, and the Queen Elizabeth rose has it in spades. For over 60 years, its pink blooms have long been a favourite among Canadian...

Now: $104.95
Was:
Canada’s largest wild feline is a rare sight in the forests of Western Canada — but only because of its secretive nature. The third coin in our Canadian Mosaics series offers a chance...

Now: $39.95
Was:
From ancient artifacts to Roman mythology and the Bible, evidence of the lily's influence on the world's cultures can be traced back thousands of years. With milky white flowers that naturally bloom...