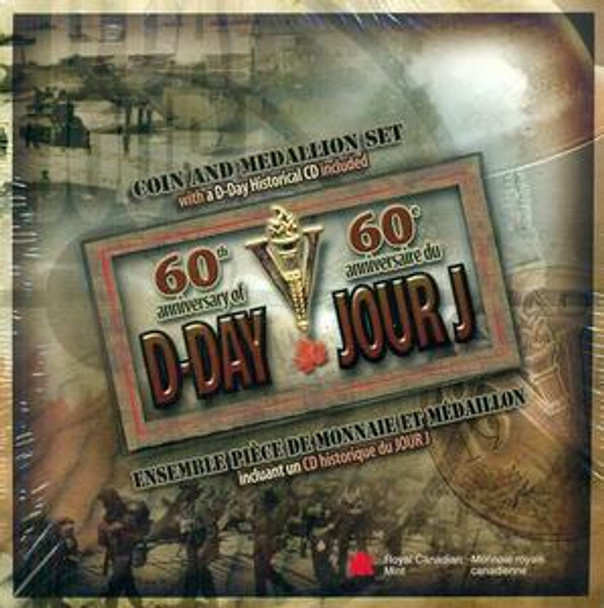 60th anniversary of D-Day
It was June 6, 1944, when 14,000 Canadian soldiers landed on
Juno Beach.
The fighting was fierce, but the Canadians managed to establish a Canadian beachhead before capturing St-Aubin, Courseulles and Berniers. One Canadian regiment succeeded in advancing 15 km (9.3 mi) inland the only Allied unit to achieve its final objective. With victory on D-Day, the end of the war had begun. Now, 60 years later, you can salute the courage of Canada’s heroes with the 2004 5-Cent Sterling Silver Coin. Brimming with historical significance, its design is a replica of the tombac 5-cent coin that was issued to replace the traditional nickel during the war. It features Winston Churchill’s  famous “V for Victory” with a torch. Along the rim of the coin, small dots and bars spell out, “We Win When We Work Willingly” in
international code.

Also included is an exclusive bronze medallion that features the same D-Day design, but with an effigy from that historic time on the obverse. It is the portrait of His Majesty King George VI,
Canada’s celebrated monarch who took a symbolic stand with Winston during “our finest hour” by refusing to leave
Buckingham Palace. This commemorative set also includes a CD with highlights of Canadian events leading up to the D-day
invasion.

Courage in the face of adversity this is a tribute that every collection must have!

Now: $24.95
Was:
2001 International Year of the Volunteer Dime Celebrating the contributions of millions of Canadians who volunteered their time and energy towards making this country and our provinces better places...

Now: $29.95
Was:
Each of these sets features the numismatic versions of Canada's circulation coins that are hand-selected to ensure the highest quality possible. Mintage: 96,847

Now: $84.95
Was:
Features a Portuguese ship and a Chinese barque. The oval-shaped design depicts the most historical relic of Macau - Ma Gao Temple - the spot where the Portuguese first landed. It is said that the...

Now: $79.95
Was:
The sight of its yellow wings fluttering about is a sure sign that summer has arrived. The Clouded Sulphur (Colias philodice) is a familiar sight throughout all Canadian provinces and territories,...

Now: $39.95
Was:
2004 Holiday Gift Set - FIRST IN SERIES This gift set features Santa Clause painted on a quarter with red enamel paint along with all the other circulating coins. This is the hardest of all the...

Now: $39.95
Was:
From ancient artifacts to Roman mythology and the Bible, evidence of the lily's influence on the world's cultures can be traced back thousands of years. With milky white flowers that naturally bloom...

2004 STAMP AND ONE DOLLAR COIN SET - THE ELUSIVE LOON

$99.95
Now: $77.00
Was: $99.95
This distinctive collectible set includes: One aureate bronze $1 proof coin with a maple leaf privy mark (exclusive to this set) Two $1 stamps (one cancelled and one mint) High quality wooden case...

Now: $229.95
Was:
A CULTURAL CELEBRATIONr Post and the Royal Canadian mint are pleased to jointly commemorate the Lunar New Year with this exclusive year of the Monkey keepsake. This set features: Sterling Silver...