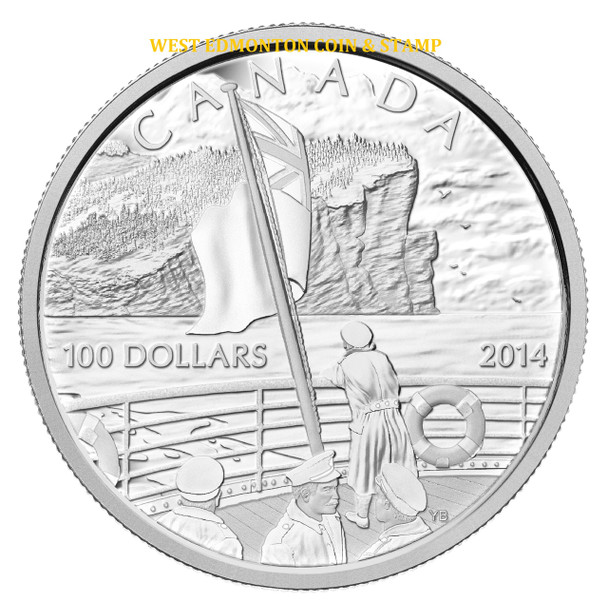 A commemoration of the 100th anniversary of the declaration of the First World War – an international conflict which would set the scene for countless stories of tragedy, courage and triumph. These helped shape Canada’s international reputation, and would ultimately result in its coming of age as a nation.

DESIGN:
Designed by Canadian artist Yves Bérubé, the reverse image captures a poignant moment as a departing soldier takes one last look at the Canadian coastline. It is October 1914 and the SS Megantic is among the ships transporting the first Canadian troops to British soil in the early days of the First World War. One soldier is leaning against the stern’s guard rail, his back momentarily turned on his shipmates who have gathered on the deck. With the Canadian Red Ensign softly flapping in the breeze overhead, the soldier takes a long look at the soaring cliffs of the Gaspe Peninsula as the ship brings him closer to the battles that surely lie ahead. Sadly, this sight would prove to be the last glimpse of Canada for many of its brave soldiers, whose personal sacrifices during the war would do much to shape the nation.

2014 PROOF SILVER DOLLAR 100TH ANN. OF THE DECLARATION OF THE FIRST WORLD WAR

Now: $249.95
Was:
A commemoration of the 75th anniversary of the declaration of the Second World War, and a heartfelt tribute to Canadians who bravely contributed to their country’s war effort. PRODUCT...

Now: $549.95
Was:
In a landscape carved by ice and wind, the polar bear remains the unchallenged titan of the Arctic. Its unmistakable profile lends itself beautifully to sculptured works of art—particularly the...

Now: $149.95
Was:
This exceptionally beautiful coin is the first coin in the Royal Canadian Mint’s series featuring an engraved and painted festive design with one-of-a-kind, hand-crafted Venetian holiday...

Now: $39.95
Was:
Issued to commemorate the 100th anniversary of the founding of Vancouver and the arrival of the first trans-Canada train in Vancouver. Canadian Pacific Engine No.371 was the first to arrive in 1886...

Now: $89.95
Was:
2014 $20 FINE SILVER COIN WOLVERINE Every day, the dramatic tales of the untamed wilderness are played out across Canada’s vast  landscape—as they have been for untold millennia...