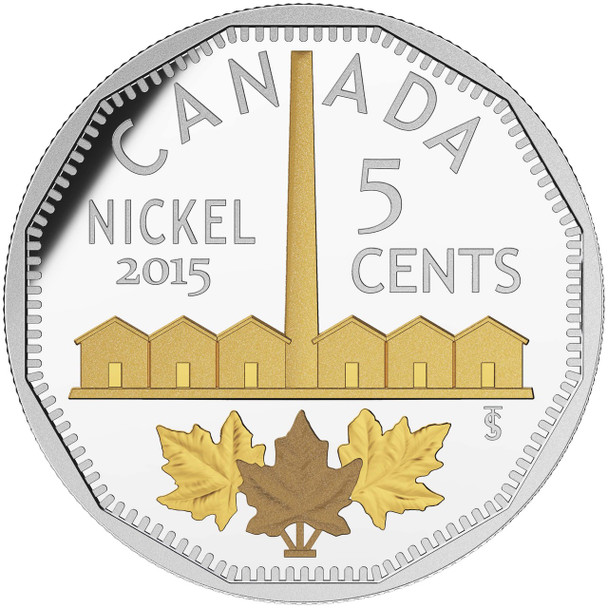 Throughout its history, each of the nickel’s transformations provides a glimpse of a young nation that was seeking to define itself, and a Mint that would come into its own. This Legacy of the Canadian Nickel series is a retrospective look at the history of 5-cent coins issued by the Royal Canadian Mint; it continues with the 1951 five-cent coin design that commemorated the 200th anniversary of the identification of nickel as an element.

DESIGN
The reverse image features Stephen Trenka’s 1951 commemorative nickel design, which was originally engraved by the Mint’s legendary master engraver, Thomas Shingles. Here, the original 12-sided coin design has been enhanced thanks to multiple finishes and selective gold plating, which bring added depth and definition to the iconic image. With its long smoke stack rising up in the centre, the nickel refinery is beautifully rendered with finely detailed engraving, as are the three maple leaves below it. The reverse is engraved with is the word “CANADA” and the face value “5 CENTS”, while the original commemorative dates have been updated to reflect the current year “2015.” The obverse features T.H. Paget’s effigy of King George VI, who was the reigning monarch at the time of the coin’s issue.

Now: $109.95
Was:
Throughout its history, each of the nickel’s transformations provides a glimpse of a young nation that was seeking to define itself, and a Mint that would quickly come into its own. This Legacy...

Now: $569.95
Was:
They are a connection to our past; and for many coin collectors, they ignited a lifelong passion for collecting. As Canada celebrates its 150th anniversary, this commemorative re-issue of the 1967...

Now: $109.95
Was:
Throughout its history, each of the nickel’s transformations provides a glimpse of a young nation that was seeking to define itself, and a Mint that would quickly come into its own. This Legacy...

Now: $2,999.95
Was:
Although the white-tailed deer is common across much of southern Canada, seeing one is still a special treat for nature lovers. A symbol of the elusive yet constant presence of nature in this land,...

Now: $2,999.95
Was:
The second of two premium releases in the North American Sportfish series is the beautiful Rainbow Trout. PRODUCT SPECIFICATIONS:SRP: $2,999.95Item...

Now: $64.95
Was:
As the UK’s longest-reigning monarch, Elizabeth II’s unexpected role as queen was undoubtedly shaped by her experiences as a princess during the Second World War. She became the first...

Now: $99.95
Was:
Since its introduction in 1988, the Silver Maple Leaf has become one of the most well known bullion investment coins in the world. Investors and collectors alike have prized it for its quality,...

Now: $739.52
Was:
From June 6 to July 5th 2015, Canadians will have the world’s best female soccer teams playing right in their own backyards as six cities across the nation host the FIFA Women’s World...

Now: $169.95
Was:
With this stunning fine silver coin, the Royal Canadian Mint commemorates the crucial role played by the 12,000 men and women who served throughout the Second World War in Canada’s Merchant...