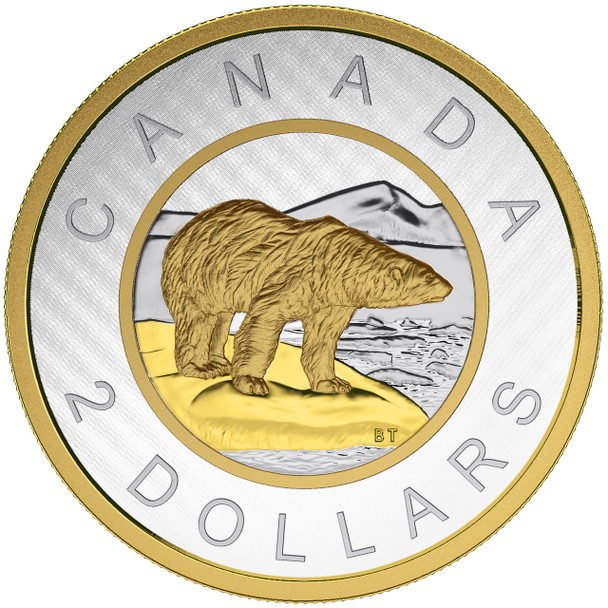 Celebrate the history and artistry of Canadian circulation coinage with this fine silver “toonie”—part of the Royal Canadian Mint’s new series featuring Canada’s six circulation coins. Each beautiful coin is composed of five ounces of fine silver and features selective gold plating on both the reverse and the obverse.

DESIGN:
This Canadian 2-dollar coin is 99.99% pure silver, with a diameter of 65 millimetres and a nominal metal weight of 157.6 grams (5 ounces). The reverse design features Brent Townsend’s image of an adult polar bear standing on an ice floe, gazing out over the early summer Arctic landscape. The polar bear and ice floe are gold-plated, as is the raised edge. The reverse is also engraved with the word “CANADA”, the date “2015”, and the face value of “2 DOLLARS”. The obverse features the effigy of Her Majesty Queen Elizabeth II by Susanna Blunt. Her Majesty’s portrait is gold-plated, along with the raised obverse edge.

Now: $522.00
Was: $699.95
Celebrate the history and artistry of Canadian circulation coinage with this fine silver 10-cent piece—part of the Royal Canadian Mint’s new series featuring Canada’s six circulation coins. Each...

Now: $3,799.95
Was:
*E-TRANSFER ONLY PRODUCT*   A curious resident of the Ice AgeThe ground sloth is one of North America’s most unusual prehistoric animals. Its peculiar bones are an intriguing and welcome...