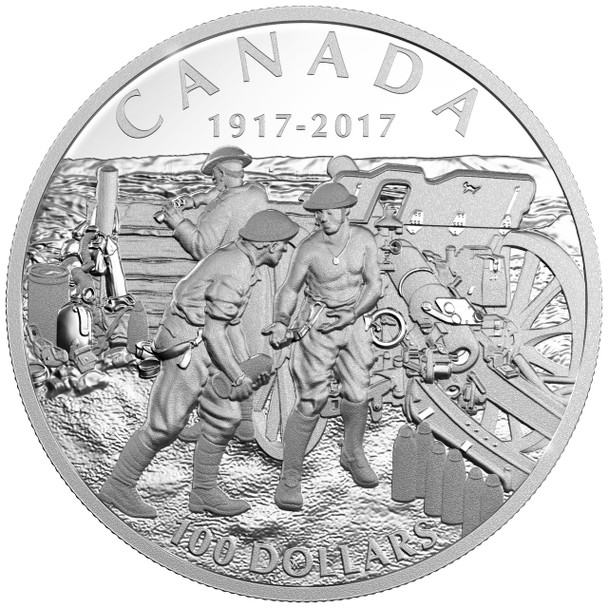 Vimy: a defining moment for Canada. For the first time in history, the four divisions of the Canadian Corps came together and fought side-by-side as one, giving way to a surging sense of national identity on the battlefield and at home. This fine silver coin commemorates the centennial of a pivotal chapter in Canada’s history, the Battle of Vimy Ridge, through this reproduction of a battle painting by Canada’s first official war artist.

DESIGN
The reverse features a highly detailed, magnificently engraved recreation of the large-sized oil painting The Taking of Vimy Ridge, Easter Monday, 1917. The coin’s large diameter (76 mm) is the perfect canvas for such a detailed reproduction of this unforgettable work by Canada’s first official war artist, Richard Jack. By focusing on a Canadian battery, the design captures the intensity of the heavy shelling directed towards enemy positions on Vimy Ridge, which forms the raised horizon in the background. The crew of the 18-pounder field gun work tirelessly and in unison as they pass shells to keep up the barrage—a fitting depiction of Canada’s troops coming together to fight as one. Engraved overhead is the word “CANADA” above the commemorative dates “1917-2017”, while the face value “100 DOLLARS” is engraved beneath the soldiers’ feet. The obverse features the effigy of King George V by Sir Edward B. MacKennal, as used on Canadian coins in the First World War period.

Now: $109.95
Was:
From Canada's unlikely north comes a natural wonder that has fascinated humanity for thousands of years - diamonds! (TAX Exempt)These precious stones began forming billions of years ago when the...

Now: $89.95
Was:
In the summer of 1914, the Royal Canadian Navy was still in its infancy when the looming threat of war sparked fears of an enemy naval threat to Canada’s lengthy coastline. The addition of two...